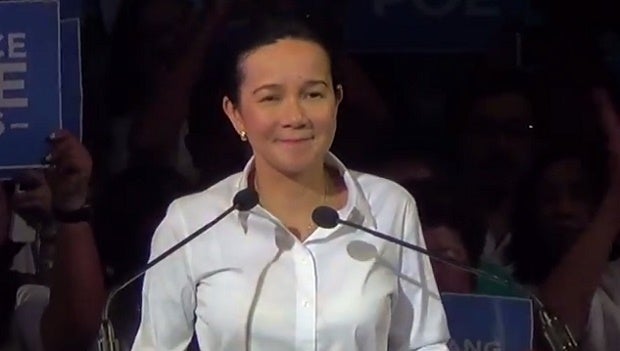 The tandem of Sen. Grace Poe and Sen. Francis “Chiz” Escudero has vowed to work toward creating an economically inclusive government that carefully listens and encourages everyone to participate toward the common goal of a united and empowered citizenry.

This developed as Poe widened her lead over other presidential candidates while Escudero continued to lead in the vice presidential race, according to the latest Magdalo survey.

Poe topped almost all regions of the country, with 43 percent of respondents favoring her, a 16-percent lead from second placer Vice President Jejomar Binay with 27 percent; former Interior Secretary Mar Roxas with 17 percent, and Sen. Miriam Defensor-Santiago with 11 percent.

Poe made the commitment of an inclusive government during the launch of their senatorial lineup at the Club Filipino in Greenhills, San Juan.

“In our team, we will not dictate what to do, but what we will only ask from them (the senators) is to have a sincere desire to help and really work hard to make the lives of our people better,” Poe said shortly after endorsing each member of her slate.

Valenzuela City Mayor Rex Gatchalian, Poe’s campaign spokesman, said the lady senator was just being consistent with her stand of creating a compassionate government that is open and willing to address the needs of the people.

“The people can really feel their genuine concern and sincerity in contrast to some traditional politicians who love to offer lots of grandiose promises which they tend to forget after the elections,” Gatchalian noted.

“That is one of the reasons why Grace-Chiz team leads in almost all preelection surveys,” he said.

The Magdalo survey from Oct. 20 to 22 was conducted after the filing certificate of candidacy for the 2016 elections.

In the vice presidential race, Escudero continued to lead with 37 percent followed by Sen. Ferdinand “Bongbong” Marcos with 24 percent,  Senators Antonio Trillanes IV and Alan Peter Cayetano, with 11 percent each. In fifth place was Rep. Leni Robredo with 9 percent, followed by Sen. Gringo Honasan with 7 percent.