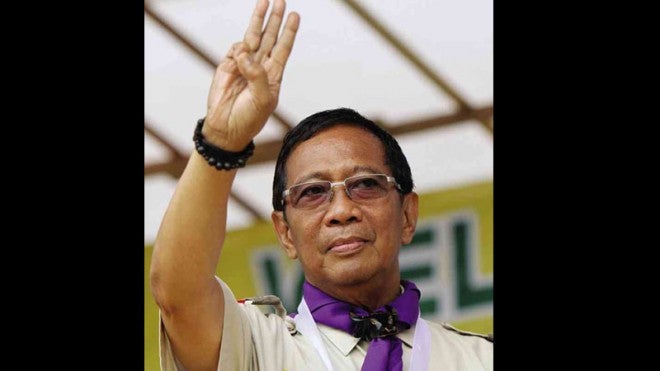 A newly minted lawyer has filed a petition with the Supreme Court seeking the removal of Vice President Jejomar Binay as president of the Boy Scouts of the Philippines, claiming that Binay’s 19-year tenure at the public organization was unconstitutional.

In his petition, Jesus Nicardo Falcis III asked the high court to declare that Binay had “acted in grave abuse of discretion” in continuing to serve as BSP head.

In the petition for certiorari and prohibition filed last Thursday, Falcis said Binay violated the constitutional prohibition against holding dual or multiple offices.

He asked the tribunal to declare Binay’s status as BSP president unconstitutional, and to “prohibit [him] from discharging the functions and duties of the national president of the Boy Scouts of the Philippines.”

In his petition, Falcis cited Article VII, Section 13 of the Constitution, which bars high officials—from the president, vice president to Cabinet members, their depuites and assistants—from holding “any other office or employment during their tenure.”

The provision says the officials during their tenure, should not “directly or indirectly, practice any other profession, participate in any business, or be financially interested in any contract with, or in any franchise, or special privilege granted by the Government or any subdivision, agency, or instrumentality thereof, including government-owned or controlled corporations or their subsidiaries.”

Noting that Binay, who was first elected BSP president in 1994, has been serving at the post for 19 years, Falcis said that “an actual case or controversy exists.”

Falcis is the same lawyer who filed a petition seeking the legal recognition of same-sex marriage in the Philippines.

As immediate relief, Falcis asked the court to issue a temporary restraining order for Binay to “desist” from acting as BSP president, “pending determination of the merits of the case.”

In response, Binay’s spokesperson Rico Quicho said the BSP executive committee was “in the best position to reply at length to the Supreme Court petition.”

“Offhand, we can say that the BSP is sui generis, [in] a class by itself. It is not a GOCC (government-owned and controlled corporation) in the strict sense of the word,” Quicho said in a statement.

(Actually, the Supreme Court ruled in 2012 that the BSP was a GOCC, not a private corporation, and subject to government audit.)

Quicho said BSP officers are volunteers elected every year, and that Binay “does not receive compensation” as organization president.

Binay is one of a group of BSP officials accused of concluding an allegedly anomalous land deal between the BSP and Alphaland Corp., which former Makati Vice Mayor Ernesto Mercado said was “grossly disadvantageous” to the BSP.

Mercado, who filed plunder charges against Binay and 16 members of the BSP National Executive Board in connection with the deal, accused the Vice President of taking P651 million in kickbacks from the sale to Alphaland of a BSP property on the corner of Ayala Avenue extension and Malugay Street in Makati City.