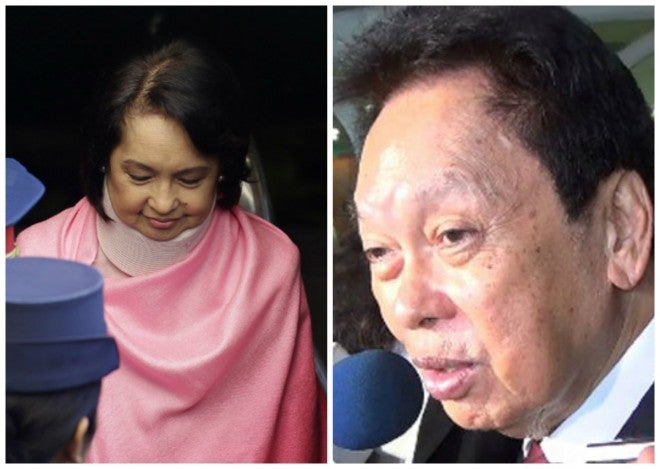 MANILA, Philippines — If former President Gloria Arroyo could be detained for plunder for authorizing the release of P366 million out of the Philippine Charity Sweepstakes Office’s (PCSO) intelligence funds, President Aquino and his officials should even be more worried for implementing the unconstitutional Disbursement Acceleration Program (DAP).

Arroyo’s lawyer Estelito Mendoza said this on Thursday, as he described the “political ambiance” at which the plunder case against his ailing client was being pursued at the Sandiganbayan despite what he contended to be the lack of evidence against the former President.

In a briefing that sought to clarify his client’s petition before the Supreme Court seeking Arroyo’s acquittal, Mendoza asserted that the Sandiganbayan has created an entirely new version of the plunder law in denying her demurrer to evidence, a pleading that sought to dismiss the plunder charges on account of insufficient evidence.

The dismissal, which prompted the Arroyo camp to elevate their plea to the high court earlier this month, indicated that the anti-graft court was inclined to convict the former President, Mendoza said.

The Sandiganbayan trial against Arroyo is on hold until Nov. 21 after the high court issued a 30-day status quo ante order on the proceedings while ordering the anti-graft court to comment on the petition.

“We may foretell that she is going to be convicted… She is going to be condemned but not under the law. That is the great tragedy. And meanwhile, she has been under detantion,” Mendoza told reporters in a briefing Thursday
morning in his office in Makati City.

“If you apply this doctrine created by the Sandiganbayan, (Budget Secretary Florencio) Abad and even President Aquino will have a lot to worry about because that is the equation, and in their case the Supreme Court already
ruled that release the of [funds under] DAP is already unconstitutional,” said Mendoza.

The analogy might not be perfect, said Mendoza, who said he was not saying that President Aquino would likely be convicted of plunder if charged criminally for DAP.

The high court had declared parts of DAP unconstitutional, including the cross-border of funds and premature declaration of savings. The Aquino administration meanwhile maintains that the program was crafted in good
faith.

“If the authorization by President Arroyo as president to release confidential intelligence funds from the PCSO already constitutes “raiding the treasury” and the crime of plunder, how would you characterize the
authorization by Secretary Abad in releasing DAP funds with the consent of President Aquino?,” said Mendoza.

He noted how Arroyo’s co-accused in the case were all acquitted, with the former President the only one left facing trial. Former PCSO general manager (GM) Rosario Uriarte is also among the accused but she has never been
arrested or put to trial.

“So to this day, she is presumed innocent of the crime of plunder,” said Mendoza, of the former official said to have withdrawn the funds in  question.

The lawyer cited how Arroyo, who has been under hospital arrest at the Veterans Memorial Center in Quezon City since her arrest on Oct. 4, 2012, has been “treated just like a person who has been convicted.”

“Essentially, therefore, she has been punished because that is what it amounts to. She is under detention, she cannot go anywhere else without permission of Sandiganbayan… Essentially, on a broad basis, no distinction
is made between those who are simply charged and those convicted and penalized already,” said the lawyer.

He hoped the Supreme Court would take immediate action on the former President’s petition, citing her frail health. The 68-year-old former leader has been suffering from a degenerative problem in her cervical spine, which
causes pain around her neck and arms.  SFM