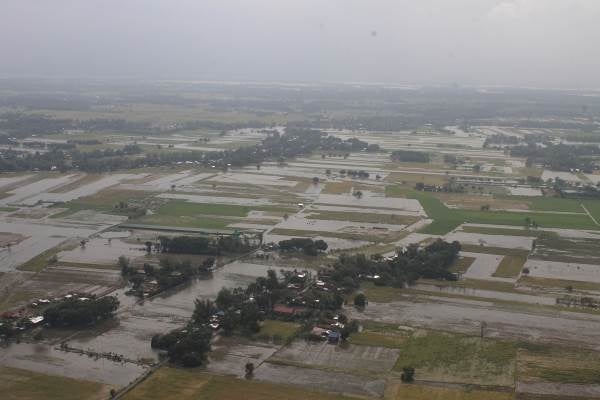 DAMAGE sustained during the onslaught of Typhoon “Lando” has risen to P 9.8 billion, more than a week after the storm slammed northern Luzon.

The National Disaster Risk Reduction and Management Council (NDRRMC) said P9,878,058,303.54 worth of crops, livestock and infrastructure were destroyed by “Lando,” dubbed the worst typhoon to hit the country this year.

Earlier, the NDRRMC said “Lando” was the most destructive typhoon the Philippines had seen this year, given the high number of casualties and damage it caused.

As of Monday, the death toll had climbed to 47, with 83 injured and four still missing.

The NDRRMC also monitored 947 “Lando” related incidents in the past week, with 928 incidents of flooding noted in the Ilocos, Cagayan Valley, Central Luzon and Cordillera Administrative Region.

So far, the waters in 655 barangays in these regions had subsided.

The government and nongovernment organizations extended P65,062,827,77 worth of relief assistance to the typhoon victims.

The NDRRMC said two provinces, one city and 11 towns were placed under a state of calamity because of “Lando.”

The typhoon also damaged hundreds of schools all over Luzon, including Metro Manila. There were 803 schools destroyed, of which 249 were totally damaged while 554 were partially damaged.

The typhoon destroyed 103,447 houses in the Ilocos, Cagayan Valley, Central Luzon and CAR, of which 15,289 were totally damaged while 88,158 were partially damaged.

The government has also begun clearing thoroughfares previously blocked by landslides and flashfloods, with 40 roads and five bridges still not passable to vehicles.

Power has been restored in most affected areas, except in the towns of Luna and Balaoan in La Union, and Quirino, Sigay and Sugpon in Ilocos Sur.