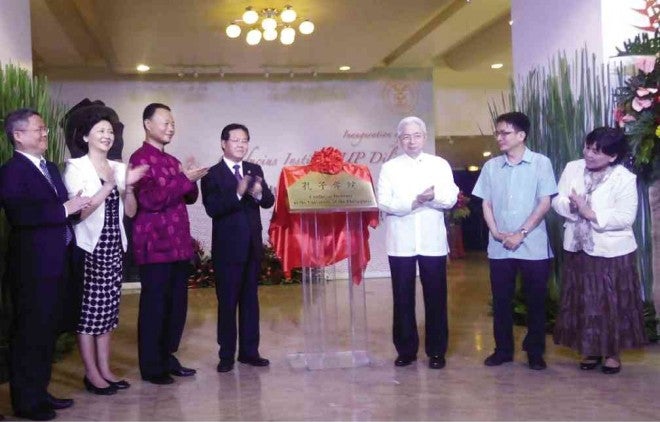 Establishing the institute on campus was a “step in the right direction,” said UP president Alfredo Pascual.

UPD chancellor Michael Tan said CI-UPD, supervised by the Office of Chinese Language Council International (Hanban), with the help of Xiamen University (XMU) in Fujian, China, would pave the way for “many exchanges in various fields in Arts and Humanities, Social and Natural Sciences, Engineering and, with our other UP units, in Agriculture, Fisheries and Medicine.”

CI aims to foster cooperation between the peoples of China and the Philippines, Tan said in his opening remarks during inauguration ceremonies at the university theater.

“Many Filipinos have Chinese ancestry reflected not only in our surnames but in our outlook and perspectives in life. Many of us appreciate our Chinese roots but we know that we are now Filipinos and the Philippines is our own land,” Tan said.

As the two countries continue to dispute sovereignty over the West Philippine Sea, Tan said in an interview that “we have to keep talking to each other. We cannot just keep saber rattling and all.”

“There are a lot of relationships between China and the Philippines and we have to contribute to that. War comes about when people stop talking,” he added.

Teaching appreciation of Chinese culture and history, through courses on China at the university, has always been geared toward Philippine development, Pascual said.

The CI in UPD, the fourth in the country, “represents the need for greater mutual understanding, respect and appreciation between our two cultures, our two peoples,” Pascual said.

The institute, named after the most famous Chinese philosopher, promotes China’s language and culture and serves as “a bridge reinforcing friendship and cooperation between China and the rest of the world,” according to its website.

But unlike its European counterparts which are stand-alone organizations, the CI is associated with the Ministry of Education of the People’s Republic of China and was established in partnership with universities around the globe.

The Hanban, also called the CI headquarters of China, assigns a Chinese university affiliate to oversee the implementation of the teaching program.

Pascual and Hanban chief executive Xu Lin signed a memorandum of agreement (MOA) on Dec. 7 last year to set up the CI at UPD.

Under the MOA, Hanban is obliged to provide teaching materials, courseware and books. The council is expected to give the university up to 3,000 volumes of Chinese books, teaching materials and audiovisual materials for the institute’s opening next year.

Based on the agreement, a board of advisers composed of representatives from both universities will be responsible for CI’s operation, formulation and approval of curricula for the teaching program, and financial and recruitment plans.

The agreement also states that XMU shall provide one or two visiting scholars or instructors on Chinese language and culture every year, as well as textbooks, reference and audiovisual materials for teaching.

THE UP WUSHU Club (left) welcomes guests with a dragon and lion dance; Zhang Lei and Li Yang (above) play traditional Chinese instruments “guzheng” and “pipa.”

The XMU president, who spoke at the inauguration, said UP and the Chinese university had frequent communication and exchanges since 2000 on various fields such as Natural Sciences, Engineering and Technology.

“The coestablishment of CI symbolizes another step forward in this collaboration,” he said through an interpreter.

Next semester, Chinese language courses would be offered to UP students and outsiders but the rates to be charged for the classes had yet to be finalized, Tan said.

The language classes will be handled by Chinese teachers.

Tan explained that the CI provided accreditation similar to that of the Test of English as a Foreign Language proficiency assessment that could be used as official proof of mastery of the Chinese language for job application.

The 240-square-meter CI-UPD temporary office with 10 rooms is located at the Advanced Science and Technology Institute along C.P. Garcia Avenue.

Tan said the CI office would be transferred to the renovated International Center in two years.

Pascual said in his closing remarks that “the need for mutual communication cannot be overstated,” as various issues beset the country’s relations with China.