Trump jabs at Jeb Bush in Florida: Not ready to be president 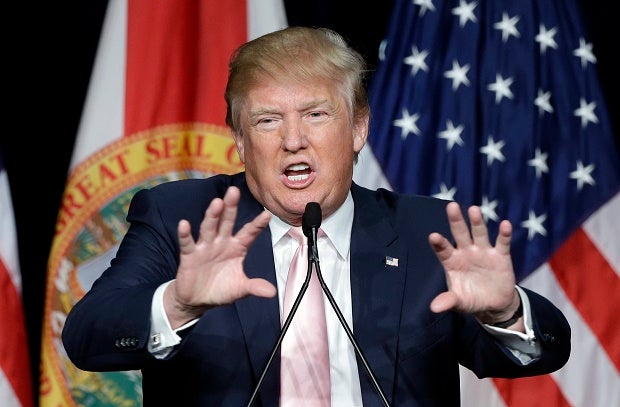 The comment came the day after the Bush campaign said it was cutting payroll by 40 percent by trimming staff and requiring an across the board pay cut for those remaining.

Trump said Bush, the son and brother for former presidents, is “losing badly and embarrassing his family.”

“Bush has no money. He’s cutting. He’s meeting today with mommy and daddy and they’re working on their campaign,” Trump told a raucous crowd of thousands gathered along the riverfront of one of Florida’s most conservative cities.

He chastised Bush for paying his finance director more than $1 million and said that if campaign staffers were willing to work for lower pay, he should have made that deal when the campaign started.

“You don’t wait till you’re failing,” he said.

By contrast, Trump said he’s only spent about $2 million on his campaign and he’s leading in polls.

“So, I’ve put up less money than anybody else and I’m No. 1,” he said. “Wouldn’t it be better if we had a country that would spend the least and be No. 1? Think about it.”

The Bush campaign responded by saying people are getting tired of Trump.

“Donald Trump needs a new schtick. Launching absurd attacks at his opponents to distract from his lack of ideas and liberal record is beginning to wear thin with voters. Donald Trump is increasingly showing each day that he is not a serious enough person to be commander in chief and lead the world’s most powerful military,” Bush spokeswoman Kristy Campbell said in an email.

If people are tiring of him, it didn’t show Saturday. An overflow crowd gathered at a downtown open-air mall for his visit. Brandon Chance, 25, wore a T-shirt with an artistic rendition of Trump pointing that said “Washington, D.C. — You’re Fired.” Chance said one of the reasons he likes Trump is that he’s never held political office and is paying for his own campaign.

Bush wasn’t the only rival Trump targeted during a speech that lasted about an hour and 20 minutes. Florida’s junior senator, Marco Rubio, and retired neurosurgeon Ben Carson also took hits.

“You’ve got Rubio doing poorly, and he sweats like a dog,” Trump said. “You’ve got Carson. I don’t know what the hell’s going on there. I don’t get it.”

It was the second straight day Trump campaigned in Florida, where he leads in recent polls — a point he took joy in letting the crowd know.

He also said Rubio is disloyal because he is challenging Bush for the nomination after saying for years that Bush was his political mentor.

“Everybody said he’d never run. Even I thought, he’ll never run because Bush was his mentor.” Trump said. “Those two guys are fighting like crazy, and I’m laughing watching them fight.”

A spokesman for Carson, Doug Watts, said in an email: “We love and respect Mr. Trump.”

The Rubio’s campaign didn’t immediately respond to requests for comment.

Read Next
Spanish workers celebrate victory over Coca-Cola in jobs row
EDITORS' PICK
97% of COVID-19 beds at PGH currently occupied
Gear up and get ready to play with Yamaha Mio Gear
Acer starts the year off strong with the Aspire Vero National Geographic Edition
Japan brings back virus restrictions over Omicron surge
Over 3 Million worth of prizes to be won at Smart Padala’s SENDali Manalo Promo!
Uproar over no vax, no ride policy: Maybe it’s time for gov’t to say sorry—Bello
MOST READ
1Sambayan names 7 aspirants in its 2022 Senate lineup
Emma Stone calls Andrew Garfield a ‘jerk’ after he ‘lied’ about his ‘Spider-Man: No Way Home’ appearance
Guevarra to Acosta: Obey rules on unvaccinated
PH to import 60,000 tons of fish to cover shortage
Don't miss out on the latest news and information.