Stormy synod ends in stalemate; over to you, Pope Francis | Inquirer News

Stormy synod ends in stalemate; over to you, Pope Francis 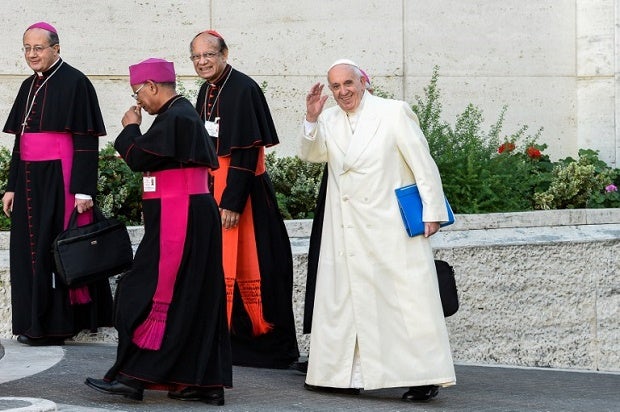 Pope Francis (R) waves during his arrival with cardinals and bishops for the morning session of the last day of the Synod on the Family at the Vatican on October 24, 2015. The Pontiff on October 4 defended marriage and heterosexual couples, as he opened a synod on the family overshadowed by a challenge to the Vatican. Pope Francis accelerated his streamlining of the Vatican bureaucracy by announcing plans to create a new ministry which will increase the role of lay believers in the Church. The Pontiff made the announcement to an afternoon session of the synod, which is due to conclude at the weekend after three weeks of often heated discussions on issues such as divorce, homosexuality and cohabitation. AFP

VATICAN CITY, Holy See — Catholic bishops on Saturday wrapped up a divisive synod by approving a compromise report reflecting a stalemate in the battle between the Church’s conservative and liberal wings over its approach to sex, love and marriage.

The document, which Pope Francis is free to ignore or implement as he sees fit, fudges the key issue of whether divorced and remarried believers should be allowed to play a full role in the Church.

And it confirms the pullback from the more explicit opening to lesbian and gay believers supported by progressives when the review of teaching on the family was launched last year.

But it also leaves Francis with room for maneuver should he wish to defy his conservative opponents and push on with his attempt to make the Church more relevant and more welcoming towards believers who find themselves in breach of its rules.

Francis, who recognized in closing remarks that the three-week synod had exposed deep divisions in the Catholic family, now has to decide if and when he updates guidelines on Catholic teaching.

The text approved Saturday advocates a “case-by-case” approach to the most controversial question, the handling of divorced and remarried believers, saying they need to play a greater role in the Church but stopping short of explicitly ending the current ban on their receiving communion.

People in this situation need to be treated with discernment, allowed to play a greater role in the Church and not made to feel as if they have been excommunicated, the document states.

Underlining how controversial this section of the text was, the paragraphs related to divorced and remarried believers only just scraped the required two thirds of synod votes to gain approval.

The document includes only one brief article on the Church’s approach to gay believers, framing the question in terms of how priests can help support families who have “persons with homosexual tendencies” in their midst.

It reiterates that the Church believes every person, regardless of their sexuality, is worthy of respect and a reception which takes care to “avoid every sign of unjust discrimination”.

But it strongly reiterates the Church’s opposition to gay marriage, saying: “There are absolutely no grounds for considering homosexual unions to be similar or even remotely analogous to God’s plan for marriage and the family.”

The emphasis contrasted sharply with first drafts last year which spoke of recognizing the value of loving same-sex relationships, to the outrage of those opposed to any dilution of Church teaching that homosexuality amounts to a kind of disorder.

In closing remarks, Francis said the synod had been about confronting “today’s realities” without “burying our heads in the sand”.

He said the divisions that had emerged reflected important cultural differences which the Church should embrace in the way it applies its teaching — an ambiguous comment that will concern conservatives.

“We have also seen that what seems normal for a bishop on one continent is considered strange and almost scandalous for a bishop from another,” he said.

Francis, 78, also appeared to take a new swipe at the conservatives who had accused him of rigging the synod’s organization to try to engineer progressive conclusions.

“The different opinions which were freely expressed -– and at times, unfortunately, not in entirely well-meaning ways -– certainly led to a rich and lively dialogue,” he said.

With conservative clerics talking of “Beasts of the Apocalypse” and the “whiff of Satan” stalking the synod, the debates of the last three weeks were played out against backdrop of frenzied claim and counter-claim.

It made for riveting drama and lively headlines but there are many who fear the gathering will be remembered primarily for the divisions on display rather than any progress on making the Church more relevant to the modern world.