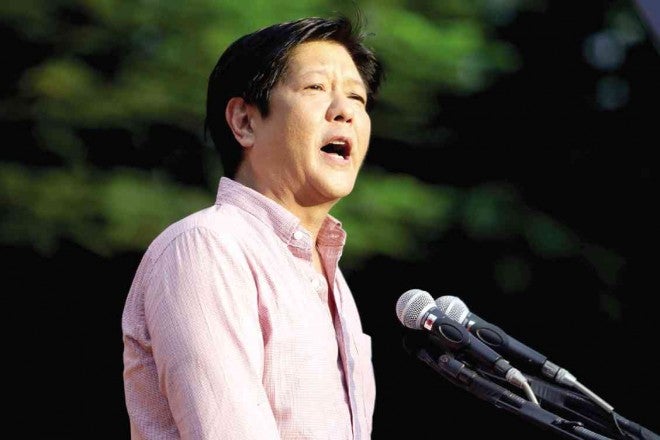 “We owe it to the electorate to elevate the level of the discussion, especially of the pressing issues facing the country today such as our problems on drugs, rising prices and criminality, and how we plan to address them,” Marcos said in a statement on Friday.

The senator said that candidates who resort to smear campaigns against their opponents are doing a “disservice” to the public.

“While mudslinging could be entertaining to some, it will not help us at all,” he said.

Despite the attacks against him and his family, Marcos vowed he would not resort to black propaganda, saying he would instead stick to a fair and issue-based campaign.

“I will fight fairly,” he said.

Marcos filed his certificate of candidacy on October 13 at the Commission on Elections Office in Intramuros, Manila.

During his announcement of his vice presidential bid, the senator said he is accepting the challenge of the new generation to start a revolution of change and progress for the Philippines.

READ: Bongbong Marcos: I accept the challenge of the new generation

Presidential aspirant Senator Miriam Defensor Santiago has announced that Marcos was her running-mate for the 2016 national elections.

Marcos, however, has not categorically confirmed their tandem.

Marcos’ candidacy has been linked to various controversies including human rights violations allegedly committed by his family during the martial law. IDL