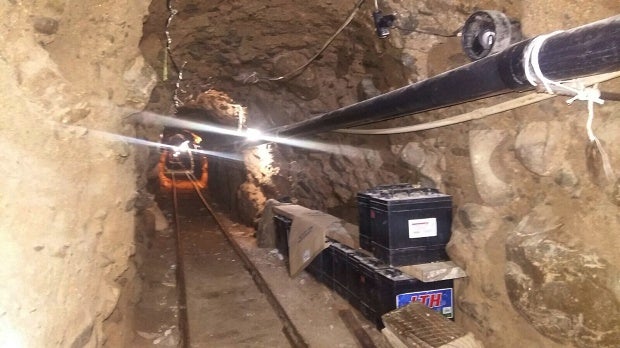 This Wednesday, Oct. 21, 2015 photo released by Mexico’s Federal Police shows an underground tunnel that police say was built to smuggle drugs from Tijuana, Mexico to San Diego in the United States. Mexican federal police said the tunnel extends about 2,600 feet (800 meters) and is lit, ventilated, equipped with a rail car system, and lined with metal beams to prevent collapse. AP

SAN DIEGO — Authorities seized 12 tons of marijuana and arrested 22 people after discovering one of the longest cross-border tunnels ever dug between the US and Mexico, officials said Thursday.

The passage connecting warehouses in San Diego and Tijuana, Mexico, was about 2,400 feet (730 meters) long and 30 feet (9 meters) deep. It was lit, ventilated and equipped with a rail system — hallmarks of the most sophisticated tunnels found along the border.

Near-simultaneous police stings on Wednesday resulted in six arrests in San Diego and 16 in Mexico. Authorities recovered two tons of marijuana in the US and 10 tons in Mexico.

US authorities said smugglers tried to move the first load of drugs through the tunnel on Wednesday but nothing got through undetected.

The sting came after an undercover agent for US Homeland Security Investigations agreed to provide the drug smugglers with drivers and the use of the San Diego warehouse in exchange for a $10,000 payment for each truckload of drugs that moved, according to a probable cause statement.

The discovery demonstrates the enduring appeal of tunnels to smugglers, despite the significant time and money required to build one. Dozens of tunnels have been found along the US-Mexico border in recent years, some equipped with hydraulic lifts and electric rail cars.

The San Diego-Tijuana region is popular because its clay-like soil is relatively easy to dig with shovels and pneumatic tools, and both sides of the border have warehouses that provide cover for trucks and heavy equipment.

It was unclear which drug trafficking organization orchestrated the latest passage but the region is largely controlled by Mexico’s Sinaloa cartel, whose leader Joaquin “El Chapo” Guzman escaped from a maximum-security prison in Mexico in July through an elaborate tunnel.

Mexican federal police said in a press release that those arrested on suspicion of drug trafficking told authorities that they had ties to a criminal group that operates in the state of Jalisco — an apparent reference to the Jalisco New Generation cartel, which controls that part of western Mexico.

The Mexican suspects were caught off-guard when authorities arrived at the Tijuana warehouse with a search warrant, police said. No shots were fired.

The drugs found were wrapped in 873 packages covered with plastic and tape.