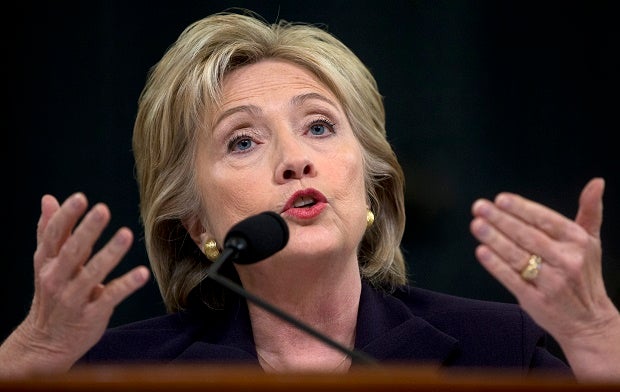 WASHINGTON, United States—Hillary Clinton stood her ground Thursday through a grueling day of questioning over the 2012 Benghazi attacks, at a high-stakes congressional hearing that could impact her bid for the White House.

Partisan fireworks exploded repeatedly between Republican and Democrat members of the House Select Committee on Benghazi.

But the Democratic frontrunner for president was relentlessly composed as she accused her rivals of exploiting the deadly attacks in Libya for political gain.

In more than six hours of highly-anticipated testimony, broadcast live across US television networks, Clinton accepted—as she has done in the past—her share of blame for the attack which cost the lives of four Americans including ambassador Christopher Stevens.

“I take responsibility for what happened in Benghazi,” she said. “I’m here to honor the service of those four men.”

But she firmly rebutted charges she failed to boost security at the US diplomatic compound overrun by Islamist extremists on September 11, 2012, saying she was never consulted directly about requests for additional measures.

Clinton also stressed the need for the United States to accept risks as it pursues its vital interests in a dangerous world, and to acknowledge that it can “never prevent every act of terrorism or achieve perfect security.”

The Benghazi tragedy has hovered over Clinton for three years, threatening to upend her White House candidacy especially after the inquiry launched 17 months ago led to revelations that she used a homebrew email account and server while she was top diplomat.

A strong performance at the Benghazi hearing could help Clinton convince skeptical voters that it is time to move on from the controversy that has dogged her campaign.

But should she stumble on such a consequential day, she could face a heightened barrage of attacks on her judgment and diplomatic acumen during the run up to the November 2016 election.

President Barack Obama’s top diplomat from 2009 to 2013 warned against the “partisan agendas” that Democrats say are driving the Benghazi probe.

“Let’s be worthy of the trust the American people have bestowed upon us. They expect us to lead, to learn the right lessons, to rise above partisanship and to reach for statesmanship,” she said in opening remarks.

Appealing for “leadership that puts national security ahead of ideology,” Clinton recalled how American officials had found a “partner” in Congress following previous attacks on diplomatic facilities as Washington united to examine what went wrong.

There were several sharp exchanges with Republicans, including over the way the administration first publicly characterized the attack—which came weeks before the 2012 presidential election—as a spontaneous reaction to an anti-Muslim video.

“Libya was supposed to be… this great success story for the Obama White House and the Clinton State Department,” as they highlighted global security gains since Obama took office, conservative congressman Jim Jordan said in a fiery critique.

“You can live with the protest about a video. That won’t hurt you. But a terrorist attack will,” he said.

“Where did the false narrative start?” Jordan asked. “It started with you, Madam Secretary.”

Clinton rejected the accusation, shooting back at Jordan: “I’m sorry that it doesn’t fit your narrative, congressman.”

The Benghazi committee has been deeply controversial, and in recent weeks GOP lawmakers including number two House Republican Kevin McCarthy suggested that the panel served to help damage Clinton’s standing in the presidential race.

Democrats have piled on, accusing the Republican investigators of conducting a fishing expedition against Clinton.

Committee chairman Trey Gowdy denied the probe was about Clinton, saying it sought “nothing but the truth.”

Several Republicans questioned Clinton about Sidney Blumenthal, a longtime friend and former Bill Clinton aide, and his direct access to her.

Gowdy at one point entered a shouting match with Democrats over whether to release the full transcript of Blumenthal emails with Clinton and aides.

The exchange prompted Clinton’s campaign chairman John Podesta to post on Twitter: “After 17 months and $4.7 million spent, their whole argument is about Sid Blumenthal?”

The US Congress has conducted seven probes into the Benghazi attack, and Clinton launched an Accountability Review Board to investigate the events.

The board’s report did not fault the State Department but cited “systemic failures and leadership and management deficiencies at senior levels” that resulted in inadequate security.

Critics have pointed to the department’s rebuff of requests for additional US security measures in Libya, left unstable after strongman Moamer Kadhafi’s ouster.

Clinton insisted such requests, or rejection of requests, rarely reached her desk.

“None of them with respect to security in Benghazi did,” she said. In the aftermath of exhaustive US reviews, as secretary of state she “moved to correct” the security shortcomings as recommended, she said.

At one point, Republican Peter Roskam argued that Clinton used Kadhafi’s overthrow in 2011 as a way to “turn progress in Libya into a political win for Hillary Clinton.”

She rejected Roskam’s statement as “political,” saying: “I don’t understand why that has anything to do with what we are supposed to be talking about today.”

Read Next
China’s Xi to visit Premier League superpower Man City
EDITORS' PICK
Gov’t plans to open COVID-19 vaccination for 5- to 11-yr-olds by January 2022
Gov’t eyeing COVID-19 vaccine booster for essential workers, indigents by Dec. 10
Villar Group gears up for AllValue Shopping Party on Dec. 3; around P 1-million promos and discounts up for grabs
Keep ransomware at bay with these security and backup strategies
Omicron variant detected in more countries as scientists race to find answers
A delightful blessing!
MOST READ
Quiboloy warns of ‘much worse than Omicron virus’ if his ‘persecution’ is not stopped
Two cases of Omicron variant detected in Canada, govt’ says
MMDA: Number coding during afternoon rush hours back this week
Marcoleta defends pol ads on ABS-CBN
Don't miss out on the latest news and information.