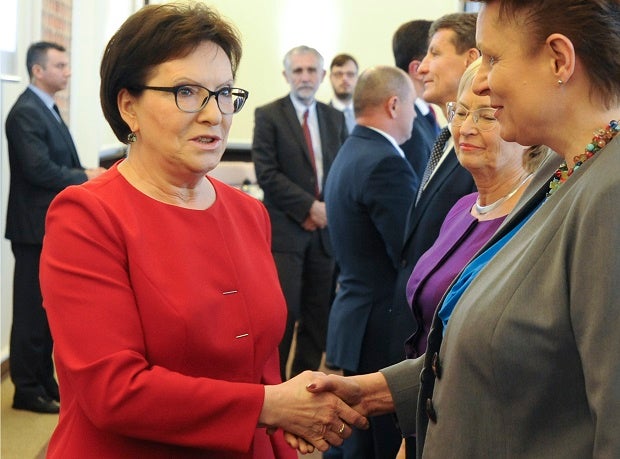 Polish Prime Minister Ewa Kopacz, left, shakes hands with Minister of Culture Malgorzata Omilanowska prior to a meeting of her cabinet in Warsaw, Poland, Tuesday, Oct. 20, 2015. Parliamentary elections in Poland will take place on Oct. 25, with current opposition party, the conservative Law and Justice leading in polls ahead of the ruling pro-business Civic Platform led by Kopacz. AP

WARSAW, Poland — Poland’s upcoming general elections are making history by having three women campaigning to lead the nation, with one almost certain to win. But the appearance of major social change in this conservative nation may be slightly deceptive.

Prime Minister Ewa Kopacz of the ruling Civic Platform is fighting to keep her job against a surging Beata Szydlo, who leads the conservative opposition party Law and Justice. The third woman candidate leads a cluster of leftwing groups, and is not considered a serious contender.

The situation may seem startling in a nation known for traditional family values, but some see the dominance of women in the race as a reflection of Poland’s old male power structure. Unpopular party barons, experts say, are pushing the women forward to capitalize on voter weariness with a male-dominated political culture that has been defined by infighting, drinking parties and scandals.

“Women have become instruments in a political game,” said political analyst Kazimierz Kik. “The party chiefs know that many voters are against them and that they cannot win. They know that women have softer manners and will not threaten their position as leaders, and put them forward. Women are to give victory to their boss’ parties; they are not to win as individual politicians. It’s a political game.”

Polls show Law and Justice with a strong lead over Civic Platform, meaning Szydlo, a 52-year-old ethnologist and relatively new figure on Poland’s political scene, is considered the top contender to be the next prime minister. However, there is widespread speculation that Jaroslaw Kaczynski, the sometimes radical party leader and former prime minister, could ultimately decide to take that job himself. Though Kaczynski has kept in the background early on in the campaign, he has been vigorously and openly active in recent days, fueling speculation that he is only using Szydlo as a softer face of the party to win votes.

Even though three women vying at once to lead the nation is unusual, women have had top leadership roles in Poland before. One of the first prime ministers in the early years of democracy was Hanna Suchocka, and women have held the roles of parliament speaker, central bank head and Warsaw mayor. On the whole women in Poland are better educated than men and often hold down jobs and support their families.

“I think it is a good move to have women decide about the direction that our country will take,” said Mariusz Makus, 54, an interior decorator. “We are sick of men politicians. We have heard and seen enough of them. Women are softer-spoken than men.”

The female political surge began when former Prime Minister Donald Tusk left Poland last year to take the top European Union job in Brussels. He appointed Kopacz, a loyal ally, to be his successor as both party leader and prime minister. Kik said Kopacz’s loyalty was a guarantee to Tusk that she would not undermine him should he return to political life in Poland.

Other parties saw that having a woman leader was good strategy and followed suit, Kik said.

In the case of Law and Justice, Szydlo was tapped after running the hugely successful election campaign of President Andrzej Duda, a previously little-known politician who came from behind to defeat a popular incumbent in May. With a son studying to be a priest, Szydlo’s conservative profile also is a plus for the party’s largely Catholic electorate.

Pollster Barbara Badora, with the CBOS institute, also thinks it might have been awkward for Kaczynski, a 66-year-old known for his old-fashioned gallantry toward women, to wage an aggressive campaign against Kopacz.

The third female contender is Barbara Nowacka, a 40-year-old computer specialist who is leading a cluster of left-wing parties, each of them plummeting under a male leader. Only together does the grouping have a chance of reaching the 5-percent threshold needed to enter parliament, and opinion polls show it may achieve that.

Agata Chelstowska, a feminist activist and analyst, believes the strong presence of women in political life is the result of years of fighting for equal rights, and a 2011 law that requires at least 35 percent of candidates in elections to be women. She also sees German Chancellor Angela Merkel, one of Europe’s most powerful politicians, as an inspiration for Poland’s women.

But disillusion with the status quo is clearly a factor. Poles were especially disgusted at a scandal that erupted in 2014, when several leaders, including former Foreign Minister Radek Sikorski, were caught on secret recordings using foul language and expressing poor views on the state of the country. The illegally taped conversations were made as they dined on oysters and other delicacies in expensive restaurants.

In another scandal, Law and Justice fired its spokesman and two lawmakers for misuse of parliamentary money for a trip to Spain, with wives and copious alcohol.

In one sign of progress, Poles are not dwelling much on the gender of the candidates but judging them for their ideas and actions. Badora, the pollster, said all three are bright and educated professionals who have proven themselves in politics.

Kopacz, 58, has shown a firm determination in her political life. A pediatrician, she also served for years as health minister under Tusk, taking politically risky decisions. As health minister, she faced the ire of the church for helping a 14-year-old rape victim find a hospital willing to perform an abortion after several doctors refused to carry one out. And as prime minister she has removed ministers compromised by scandal, helping to rescue her party’s reputation.

“It was a very challenging year for her … but she has done well,” said Materska-Sosnowska.