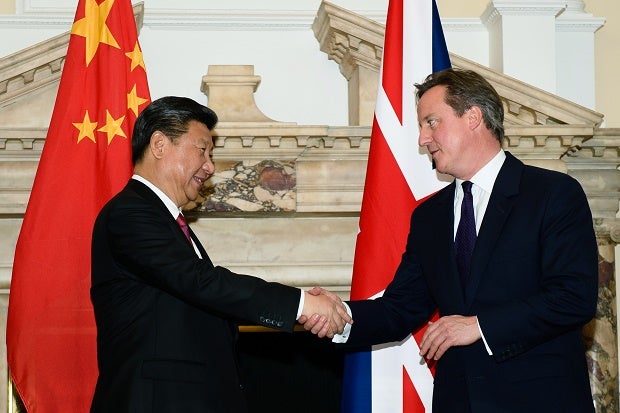 British Prime Minister David Cameron, right, shakes hands with China’s President Xi Jinping, at the UK-China Business Summit in Mansion House, central London, Wednesday, Oct. 21, 2015, on the second day of the president’s state visit. Britain will be China’s “partner of choice” in the West, Prime Minister David Cameron declared Wednesday, as China demonstrated its commitment by putting down a 6 billion-pound ($9.3 billion) stake in the U.K.’s first nuclear power plant since the 1980s. Pool Photo via AP)

Beijing and London secured deals worth about 40 billion pounds ($62 billion) on Wednesday during Chinese President Xi Jinping’s first state visit to the UK.

According to the British government, the cash generated by the new deals will help to create 3,900 jobs across the UK.

The most eye-catching is an agreement for China to partly finance a UK nuclear power plant, which British Prime Minister David Cameron hailed as “historic.” It is also the first major Chinese investment in a Western nuclear facility.

Cameron said Britain had also sealed oil and gas deals with China worth more than 12 billion pounds, including with BP PLC. It also landed a 2.6 billion pound deal to make new cruise ships, according to a Reuters report.

Speaking at the UK-China Business Summit after his meeting with Xi, Cameron said the UK and China will support each other in their ambitious development plans and empower each other to ensure prosperity.

He said Britain will be China’s best partner in the West, and that is “in our national interests.”

Xi said China will continue to encourage more Chinese companies to invest in the UK, while welcoming UK firms to come and do business in China.

As confirmed by Xi and Cameron during their media briefing, China’s General Nuclear Corp will take a one-third stake in the planned $28 billion Hinkley Point nuclear plant owned by France’s EDF.

The power generated at Hinkley Point is expected to come on stream in 2025. As the largest inward investment ever in the UK, the British government said it will generate enough energy to power 6 million homes.

CGN will also take a two-thirds stake in the Bradwell nuclear plant east of London, where it plans to build a Chinese-designed reactor, which will be China’s first showcase for its nuclear technology.

The company will also take a one-fifth stake in a project for Areva-designed reactors at the Sizewell plant in eastern England.

Other cooperation initiatives include a deal with Aston Martin and China Equity to produce a zero-emissions car.

“We think there are really good opportunities for British and Chinese companies to cooperate in many sectors, such as e-commerce, energy, resources, financial resources, services, healthcare and infrastructure,” Stephen Phillips, chief executive of the China-Britain Business Council, told China Daily.

The council is a London-based organization that helps British companies to increase and develop their business in China.

“The UK needs infrastructure—new energy. So if Chinese investment is making that happen sooner than it would happen—if the investment is there—that will obviously be positive for the UK economy,” Phillips said.