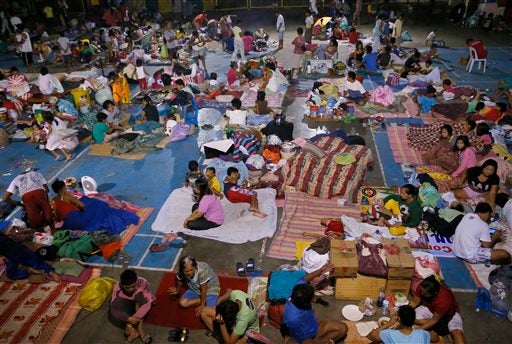 Typhoon evacuees are housed at a school gymnasium after fleeing their homes due to flooding brought about by Typhoon Koppu in Cabanatuan city in northern Philippines Monday, Oct. 19, 2015. The slow-moving typhoon blew ashore with fierce wind in the northeastern Philippines early Sunday, toppling trees and knocking out power and communications and forcing the evacuation of thousands of villagers. AP PHOTO

Deaths from the wrath of Typhoon “Lando” (international name: Koppu) have risen to 26, according to the National Disaster Risk Reduction and Management Council (NDRRMC).

However, a tally by news agency Associated Press put the dead at 39 citing officials, while the Agence France-Presse counted 47 based on figures from local government authorities and regional civil defense officials.

As of Wednesday, the official tally from the NDRRMC also said that there were 18 injured.

Seven of the additional deaths lost their lives to drowning and landslides.

Agricultural damage was pegged at around P6 billion.

The tropical cyclone caused widespread flooding in Luzon and some provinces continued to be submerged.

“We have received reports that Pampanga is experiencing a rise [in] floodwaters,” NDRRMC spokesperson Mina Marasigan said.

She warned those in evacuation centers not to return to their homes yet.

Water from this dam comes from the Cordillera mountains and the Binga Dam in Benguet.

The water released by San Roque Dam goes to the Agno River’s downstream, then traverses 19 towns and cities before going to the Lingayen Gulf.

Lando, which dumped heavy to intense rains mostly in Central Luzon at its peak, weakened into a tropical depression early Wednesday.

When Lando was at a typhoon intensity, it pummelled Aurora with its heavy rains and strong winds.

At its peak, Lando also caused suspension of classes, cancellation of dozens of flights, and stranded thousands of passengers. With reports from AP, AFP. IDL