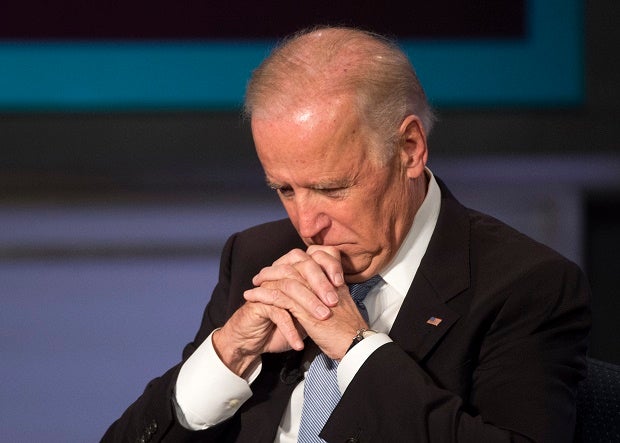 WASHINGTON — Vice President Joe Biden cast himself Tuesday as President Barack Obama’s kindred spirit and chief global emissary, amplifying themes he could use to appeal to loyal Obama supporters if he challenges Hillary Rodham Clinton in the presidential race.

Without mentioning Clinton by name, Biden sought to portray his own leadership as more critical to the Obama administration’s successes than that of the Democratic front-runner and former secretary of state. At a forum honoring former Vice President Walter Mondale, Biden offered clear hints at how, if he runs for president, he would contest Clinton’s claim to the president’s legacy and appeal to Democratic voters whose loyalty to Obama remains firm.

“President Obama and I have ideologically had no disagreement,” Biden said. “I mean none. Zero.”

With his 2016 deliberations extending deep into overtime, Biden offered no explicit clues about his decision. Yet he took a number of veiled shots at Clinton, who said in last week’s Democratic debate that the enemy she was most proud to have made was “probably the Republicans.”

“The other team is not the enemy,” Biden said later Tuesday at an evening gala honoring Mondale. “If you treat it as the enemy, there is no way we can ever, ever, ever, ever resolve the problems we have to.”

He repeatedly described that approach as “naive.”

In an unusual reversal, Biden revised his account of the run-up to the 2011 raid that killed Osama bin Laden, asserting that he had privately advised Obama to proceed. Without naming Clinton, he contradicted her claim to have backed the raid from the start by saying only the defense secretary and CIA chief were fully in favor.

As his deliberations about 2016 extend deep into overtime, Biden offered no explicit clues about his pending decision, but took a number of veiled shots at Clinton, who said in the first Democratic debate last week that the enemy she was most proud to have made was “probably the Republicans.”

“I don’t think my chief enemy is the Republican Party,” Biden said, adding that he still has many friends in that party.

In another observation with heavy 2016 undertones, Biden said he was the one that Obama would dispatch to speak to key world leaders like Russian President Vladimir Putin or Turkish President Recep Tayyip Erdogan.

“We’ve had two great secretaries of state, but when I go, they know that I am speaking for the president,” Biden said.

The Democratic political world has been on edge for weeks awaiting a decision from Biden, who has blown past his own deadlines for deciding even as advisers insist he understands the importance of getting in or out soon. Rampant speculation took a chaotic turn on Monday with a flood of assertions that Biden was running or would announce a run imminently. None of those predictions have yet materialized.

Portraying himself as a natural extension of Obama’s presidency, Biden touted his close relationship with the president, and said they spend between four and seven hours a day together. At least half of Obama’s staff used to work for Biden, he said, describing his decision to join Obama as his vice president as “the best decision of my political career.”

If he runs, Biden’s recollection Tuesday of what played out behind the scenes of the bin Laden raid will likely face additional scrutiny — particularly from Clinton, who has touted her support for the raid as an example of Obama trusting her solid judgment on national security.