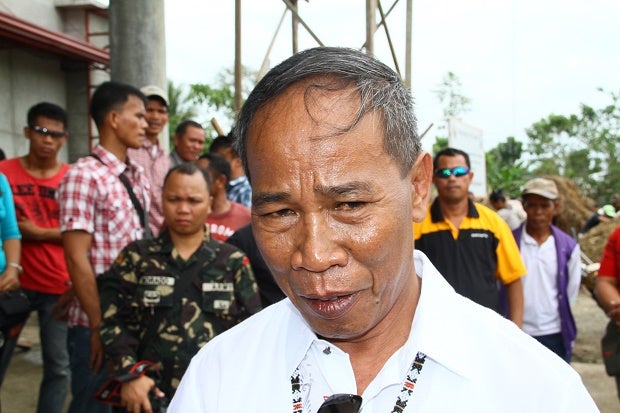 Mayor Dario Otaza of Loreto, Agusan del Sur poses for an interview with reporters in December last year saying his town has managed to drive away communist insurgents New People’s Army and dissuaded residents from joining the group. He was a former NPA rebel himself who returned to the folds of the law and managed to enter politics. He and his 27-year-old son were slain last Tuesday. DENNIS JAY SANTOS/INQUIRER MINDANAO

BUTUAN CITY—They came around 6 p.m. on Monday, wearing T-shirts emblazoned with the letters “NBI.” They wore slippers and said they had come to arrest the mayor.

They had been hogtied and their bodies were riddled with bullets.

Otaza was a former rebel who surrendered and later became mayor of Loreto in Agusan del Sur province, helping liberate the town from insurgents’ influence.

He became an outspoken critic of the NPA and helped convince nearly 250 rebels, most of them members of his lumad indigenous community, to surrender to the government.

Lumad is a Bisayan term meaning “native” or “indigenous,” a word adopted by some ethnic groups to distinguish themselves from Mindanaons, Moro or Christian.

The son of a slain NPA leader has been tagged by investigators as the leader of 16 to 18 armed men who abducted and executed Otaza and his son.

“We condemn in the strongest possible terms this cowardly act,” Communications Secretary Herminio Coloma Jr. said. “We hope Mayor Otaza’s death unites the people of Agusan del Sur, the Manobos and the entire lumad community, and every decent Filipino in working towards meaningful peace.”

A military report said Otaza and his son were taken from their home in Barangay Baan Riverside by men who posed as NBI agents and were carrying M-4 rifles.

The Otazas’ hands were tied behind their backs when found five barangays away from where they were seized.

“The area where the bodies were found is mountainous and isolated,” said one investigator.

The mayor’s security staff said four to five gunmen in NBI shirts and riding on a Starex van without a plate number blocked the gate and forcibly entered the mayor’s house.

According to the mayor’s bodyguards, they were not able to respond quickly because of confusion over the NBI shirts.

One of the Inquirer sources said that apart from the gunmen who took the victims away, others surrounded the house and still others were on motorized bancas in a river near the house.

The bodyguards also said Otaza fought the abductors but was kicked and punched and forced into the van. The Starex was found abandoned in the next town, one investigator said.

The bodies of the Otazas were recovered by troops from the Army’s 23rd Infantry Battalion.

Coloma described Otaza as an “invaluable partner for peace in the region.”

“His programs to ensure that former rebels have the means to lead dignified lives encouraged many insurgents to lay down their arms,” Coloma said.

Security officials suspect that NPA rebels from the Guerilla Front Command 4A took part in the double killing because of the “methodology” employed and the “motive” behind the crime.

“They are the primary suspects,” Undersecretary Emmanuel Bautista of the Cabinet Cluster on Security and Peace told Malacañang reporters.

Bautista, a former Armed Forces chief of staff, said the abductors “really had the intention to kill father and son.”

Mayor Otaza was himself a Manobo leader and a former NPA rebel who surrendered to the government in 1986 soon after the restoration of democracy.

More than 250 lumad who joined the NPA returned to the government fold because of Otaza, Bautista said.

Otaza told the Inquirer at the time that he and his wife left the armed movement after the 1986 Edsa People Power Revolution because the fight against the Marcos dictatorship was over.

He had since devoted his life to helping his fellow indigenous people.

The lumad, struggling to protect their land, have been in the center of conflicts, in which militants blame the military for alleged human rights abuses.

The military presence has supposedly displaced nearly a thousand lumad in Talaingod and Kapalong in Davao del Norte and San Fernando, Bukidnon since August.

A lumad school director and two other indigenous leaders were killed in September in Lianga, Surigao del Sur, allegedly by a paramilitary group supported by the Army. The military denied the allegation.

Bautista said several lumad killings were perpetrated by the NPA. “Hundreds have been killed in the past so many years,” he said.

“It is unfortunate that the lumad are in the center of all of this,” Bautista said. “Their ancestral domains are where most of the NPA guerilla bases are. We appeal to the NPA to spare the lumad.”

Bautista added: “They deserve to live freely in their ancestral domain and we hope that this is respected. Any ideological or political issue must be resolved without exploiting any groups.”

Leader of the raiders

Col. Alexander Macario, commander of the Army’s 401st Infantry Battalion, said that Ka Tindogan, head of the NPA Front Committee 34, had been identified by Otaza’s security escorts as the head of the rebel team that swooped down on the mayor’s residence.

Macario said Tindogan was also identified by barangay chair Jeremiah Cafe as the one who approached village officials pretending to be NBI agents out to arrest Otaza.

Tindogan is the son of Rene Tindogan, former head of the NPA Front Committee 88, which operates in Agusan del Sur and Surigao del Sur. The elder Tindogan and nine other rebels were killed by a Manobo tribal militia force organized by Otaza in a raid on a rebel camp outside Loreto in 2009.

“No doubt the NPA was behind the killing of Mayor Otaza. The son of Rene was identified during the abduction,” Macaritold the Inquirer.

Macario said execution of Otaza and his son were a clear case of revenge attacks. The NPA has not issued any statement.

Melencio Otaza, the mayor’s elder brother, said that “if indeed [the mayor] had debts in the revolutionary movement so be it, but why include my nephew, he’s innocent.”

Capt. Patrick Martinez, spokesperson of the 4th Infantry Division, said based on the manner of the executions, the suspects bore extreme anger for Otaza.

Mayor Otaza was running for reelection.

Otaza, a close relative of Agusan del Sur Gov. Eddiebong Plaza, was elected mayor in 2013. He had since become an outspoken critic of the NPA.

Interior Secretary Mel Senen Sarmiento said: “Since he returned to the fold, he has been active in encouraging other [rebels] to turn away from the armed struggle. The mayor has been instrumental in ensuring there are appropriate benefits for rebels who decide to help the government through legal means.” With reports from Frinston Lim and Karlos Manlupig, Inquirer Mindanao; Julie M. Aurelio and Jaymee T. Gamil in Manila