As Typhoon “Lando” (international name: Koppu) pummels northern provinces, thousands of people have been evacuated while others remained stranded in several ports.

But as of latest, National Disaster Risk Reduction and Management Council Executive Director Alexander Pama said no casualties have been reported so far.

In a press briefing on Sunday morning, Pama said 1,760 families sought refuge in evacuation centers in the provinces of Aurora, Isabela, Quirino, and Cagayan.

Two cities and 22 municipalities in northern Luzon also lost power due to the typhoon.

At least eight bridges in Casiguran, Aurora, where Lando made its first landfall, have also been rendered impassable.

However, Pama said that the Department of Public Works and Highways has begun its clearing operation in areas affected by the typhoon.

Thirty flights, 28 of which were domestic, were canceled.

In its 5 a.m. bulletin, the Philippine Atmospheric, Geophysical and Astronomical Services Administration (Pagasa) said the slow-moving typhoon slightly weakened, packing maximum sustained winds of 175 kilometers per hour near the center with gusts of up to 210 kph.

On Saturday night, Lando packed maximum sustained winds of 185 kph with gusts of up to 220 kph.

It also slowed from 12 kph to only 3 kph on Sunday morning. It continues to move westward.

The eye of the typhoon was located 135 km east northeast of Baler, Aurora or 90 km east southeast of Casiguran, Aurora.

Storm surge in affected areas were expected to a maximum of 3 to 4 meters in Aurora and neighboring provinces while wave height in open sea may reach up to 14 meters or higher.

READ: ‘Lando’ to linger for 3 days

Pagasa also advised fisherfolk not to venture out over the seaboards of Luzon, Visayas and the northern and eastern seaboard of Mindanao.

Signal No. 4 Aurora was still raised over Aurora.

Signal No. 3 was up in Isabela, Quirino, Nueva Vizcaya, Nueva Ecija, Ifugao and Northern Quezon including Polillo Island.

Meanwhile, Metro Manila was still at signal no. 2 as well as in Cagayan including Calayan and Babuyan Group of Islands, Benguet, Mt. Province, Kalinga, Apayao, Pangasinan, Tarlac, Pampanga, Bulacan, Rizal, and the rest of Quezon.

Residents in low lying and mountainous areas of the affected provinces were also alerted against possible flashfloods and landslides. RAM 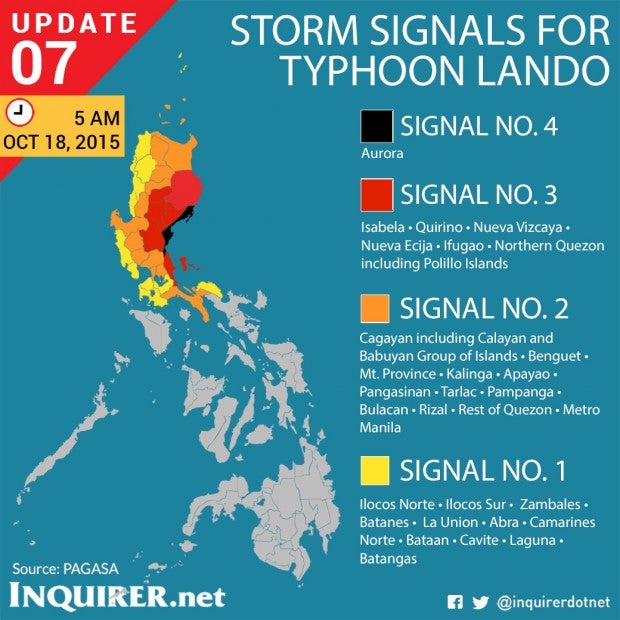 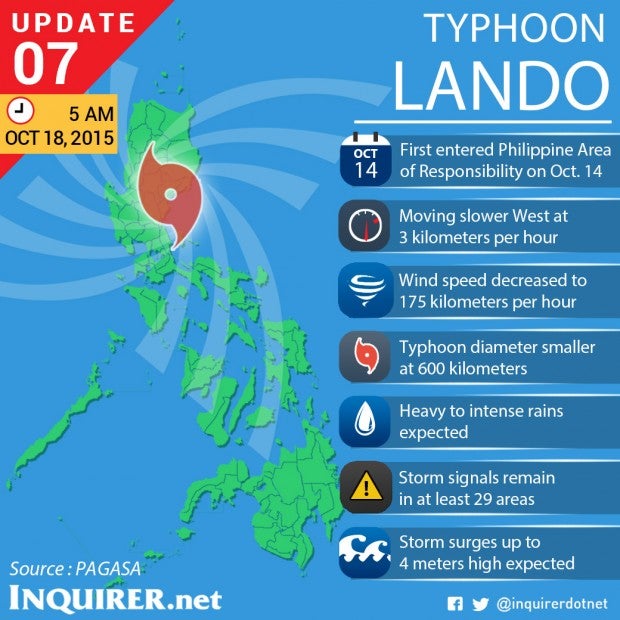