Presidency a dance not for Duterte 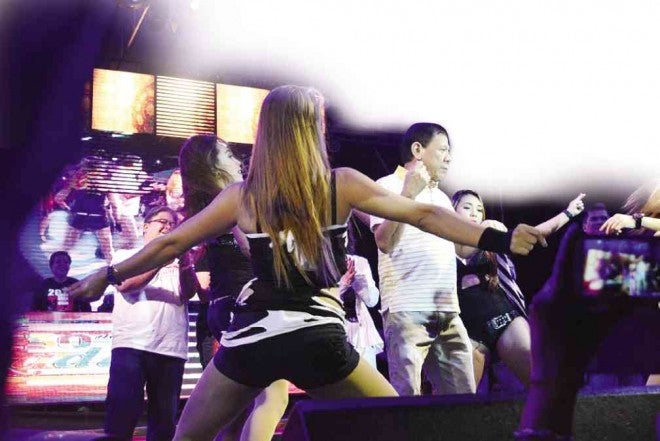 He danced the “Watch Me (Whip/Nae Nae)” on the TV program “Gandang Gabi Vice.” He gyrated to the “budots” move on “Kapuso mo Jessica Soho.” He did some twerking, with backup dancers, at the opening of Davao’s Kadayawan festival this year.

But when confronted with the chance to perform what could have been the greatest dance of his political career, Mayor Rodrigo Duterte refused to face the music.

Until the last minute, Duterte, mayor of Davao City for over 22 years and recently one of the top-rating personalities among the prospective presidential candidates in the 2016 elections, kept everybody guessing whether he was running for President.

Some supporters, who got angry by what they thought was his “flip-flopping,” started calling him a great political “tease,” for not declaring outright his interest to run.

But to their dismay, the tough-talking mayor made it clear that he minced no words in his decision—he is not running.

Observers, who have watched Duterte since he first ran for public office in 1988, did not find Duterte’s unpredictability surprising.

Given Duterte’s penchant for last-hour drama and his reputation as someone hard to decipher, they watched for and expected Duterte to appear at the last minute and file a certificate of candidacy (COC) for President in Intramuros.

But he did not show up, to the disappointment of supporters.

Following Duterte’s nth announcement on Monday that he was not running for President, supporters who like to call themselves the core of the Duterte for President Movement trooped to Metro Manila, anticipating Duterte’s filing of his COC in the Commission on Elections office in Palacio del Governador on Thursday, a day before the deadline.

While they did so, they were fanning hopes that Duterte, contrary to what he said for the nth time that he would not run, would be running after all. This prompted people to hope.

Why were people dreaming of a Duterte run?

“It’s not every day that we have a political candidate from Mindanao who has such a big chance to be President,” said Rep. Karlo Nograles, son of former Speaker Prospero Nograles, known in the city as Duterte’s staunch political rival.

Interviewed before the COC filing deadline, when people were still expecting Duterte to run, Nograles said: “It would be a shame not to support him, simply because he is from Davao and he is from Mindanao.”

Nograles said he filed early his COC to run for reelection as Davao City’s first district representative just to allay fears and speculations that he is interested to run for other posts. Nograles was seen as a mayoral candidate, possibly challenging Duterte’s daughter, Sara, a former mayor, or Duterte’s son, Paolo, the vice mayor.

That is if Duterte decided to run for President.

Nograles’ early filing only showed the alignment of political forces in Mindanao for a possible Duterte run.

Rep. Manny Pacquiao, who declared his support for Duterte, also said earlier that it would be a shame to belong to another party if Duterte, who is from Mindanao, would be running for President.

The clamor for Duterte to run for President came from the people’s desperation and dissatisfaction over the current crop of leaders, said Mayor Leoncio Evasco of Maribojoc in Bohol province, Duterte’s adviser, in an earlier interview.

“They are dissatisfied because existing institutions are no longer responsive to their needs,” he said.

From someone outside the national capital region, Duterte appeared different from all the three presidential contenders—he speaks about what people in Mindanao and in other neglected areas in the country have been suffering from for a long time: the centuries-old bias by the centralized government, their lack of voice in the top policy decisions directly affecting their lives.

In a rally in Sta. Cruz town in Davao del Sur province, Duterte asked top leaders of the Moro Islamic Liberation Front, “Why are we fighting each other here in Mindanao?”

“Let’s all fight Manila, where all the decisions are being made,” he said, referring to the top policy decisions that many times had plunged parts of Mindanao in war.

Things like these made people root for Duterte, but until the last minute, both his allies, his political handlers, even his political rivals, were asking each other whether he was running.

But when he said for the nth time on the first day of COC filing that he was not running, his political handlers failed to note the tenor of finality in his voice, and continued fanning false hopes.

He was not too hard to decipher, everybody just did not listen.

Read Next
Senior al-Qaida commander killed in an airstrike in Syria
EDITORS' PICK
Infants bundled off; no one hurt in PGH fire
Tired of your Wi-Fi signal problems at home? Here’s a solution!
OPINION: Mischief Reef – where it all started
POVA x Mobile Legends Bang Bang: A partnership that’s built to win
CPA Australia and their designation: Advance your career
Fire-damaged PGH calls for donations
MOST READ
Leonen impeachment case moves forward in House
Hot, humid weather for PH on Monday — Pagasa
Mischief Reef – where it all started
Woman believed to be dead wakes up minutes before her cremation
Don't miss out on the latest news and information.