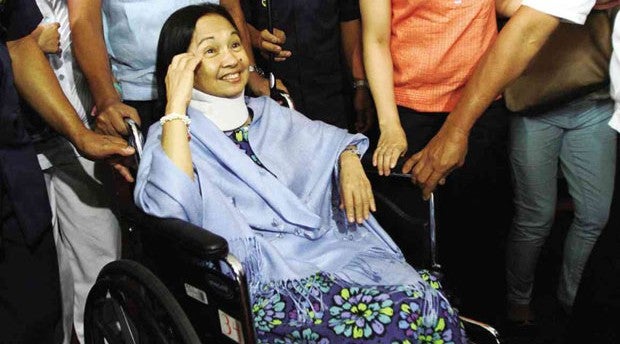 The Sandiganbayan has granted former President Gloria Macapagal-Arroyo a two-day furlough for a medical check-up at St. Luke’s Medical Center in Quezon City.

In a resolution, the antigraft court First Division granted Arroyo’s leave to have a check-up at St. Luke’s for humanitarian reasons.

Arroyo has asked the court to stay overnight from 9 a.m. on Oct. 21 to 4 p.m. on Oct. 22 to conduct various medical tests on her arm. Arroyo has complained of numbness in her left arm.

Arroyo attributes the numbness and weakness in her left arm and grip to her cervical spine disease.

READ: Arroyo seeks furlough for check-up of numbness in arm

“In view of her progressing left arm radiculopathy and weak grip, which could be attributed to her three major cervical spine operations, we are also requesting for a repeat Electromyography with Nerve Conduction Velocity Test to localize the involved nerve roots,” according to a medical certification attached in Arroyo’s motion for leave.

Among the tests being recommended for Arroyo to undergo are the Positron Emission Tomography (PET) Scan and tumor marker tests such as Alpha Feto Protein for the liver, Carcinoembryonic Antigen (CEA) for the breast and pancreas and CA 125 Calcitonin for the medullary thyroid.

Arroyo’s lawyers said the Veterans Memorial Medical Center (VMMC), where she is detained for plunder, has no equipment for these tests.

Arroyo ran and won as Pampanga representative in 2010 after her term as president for nine years. Her congressional run was believed to be a strategy to get immunity from suit amid several corruption allegations during her term.

Arroyo was ordered arrested in Oct. 2012 on charges of plunder for allegedly stealing from state lottery funds. Arroyo had proceeded to the hospital before the warrant against her was served.

Claiming to be suffering from a degenerative bone disease, Arroyo was ordered placed under hospital detention at the VMMC. Arroyo won her reelection bid in 2013 even while under detention. She is seeking a third term in 2016.

Arroyo is accused of using P366 million in intelligence funds of the Philippine Charity Sweepstakes Office (PCSO) for personal gain from 2008 to 2010.