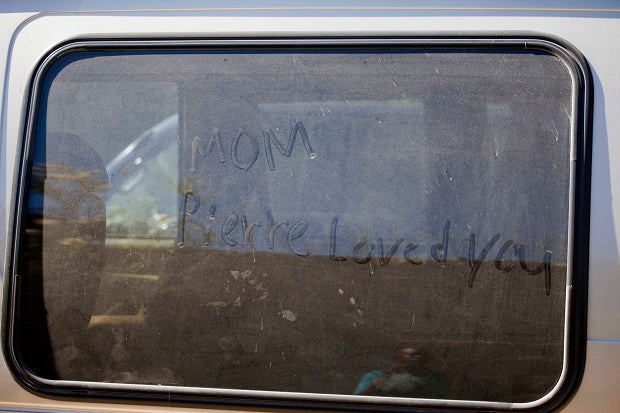 A message for slain missionary Roberta Edwards is seen on a dusty car window parked outside the Sonlight Children’s Home in the Port-au-Prince district Croix-des-Bouquets, Haiti, Wednesday, Oct. 14, 2015. Edwards who ran Sonlight was fatally shot by gunmen Saturday night as she sat behind the wheel of her car on a residential street. The attackers also kidnapped a 4-year-old from Edwards’ car after shooting her at close range. AP

PORT-AU-PRINCE, Haiti — No ransom demand has been received since gunmen snatched a 4-year-old boy over the weekend and killed the American missionary who had raised him since he was a severely malnourished infant, church officials said Wednesday.

Longtime Haiti-based missionary Roberta Edwards was fatally shot by two attackers who cut off her car on a rutted, dirt road late Saturday near the foster care home and food-distribution site she has run on the outskirts of Port-au-Prince since 2002. She was returning from a gas station with three of her young charges.

READ: In Haiti capital, gunmen kill US missionary in her car

The Estes Church of Christ in Henderson, Tennessee, which sponsored Edwards’ work at the Sonlight Children’s Home, said her two teenage passengers managed to escape after she told them to run for their lives.

Edwards was shot multiple times at the wheel of her car, and the gunmen then grabbed terrified youngster Jonathan “JoJo” Paul and sped off in a vehicle with tinted windows, fellow missionaries said.

“Hearts are breaking for him. And we certainly hope that whoever took him, wherever he is, whoever has him, will return him as soon as possible,” said Larry Waymire, a longtime colleague and friend of the 55-year-old Edwards.

Police have given only the broadest outline of the case and no details of the investigation. The motive behind the killing and apparent kidnapping remains unclear.

Harold Pirtle, a church elder who traveled from Tennessee to comfort the children at the home run by Edwards in Croix-des-Bouquets, said she was well aware of the dangers in Haiti. She had lived in the impoverished country for two decades, initially moving here with her Haitian husband. The marriage didn’t last.

During a trip back to Tennessee a couple of months ago, Edwards told church elders that she had considered leaving Haiti, saying she had been feeling “tired” and “scared,” Pirtle said. But she never mentioned receiving any threats or provided any specific reasons she felt frightened, he said.

“You can imagine being here and doing this work — she’d been doing it for 20 years. And so she had considered leaving the work, but then she said: ‘I can’t leave the kids,'” Pirtle said.

Waymire said the abducted boy came to the children’s home when he was 9 months old. He was just “skin and bones” at the time, and being raised in northeastern Haiti by his blind grandmother, who apparently asked a local preacher to find decent care for him. His mother was dead.

Recently taken photographs show a healthy-looking child with bright eyes and a ready smile. Waymire said Jonathan, the second youngest resident at the foster home, rarely left Edwards’ side. One of the photos shows him resting in her lap.

The killing stunned residents along the area’s narrow dirt roads. Hundreds of people, some weeping, gathered outside the gates of the children’s home and abutting nutrition center the morning after Edwards’ killing.

The youngsters at the home, many of them teenagers, gathered together Wednesday to prepare for a counselor’s arrival and plan a memorial service for Edwards, who they called “mom.”

One of the youngsters wrote on a dusty car window: “Mom, Pierre loved you.”