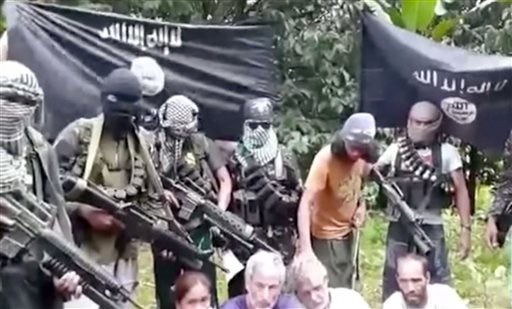 This frame grab from militant video purportedly shows armed militants surrounding two Canadians, a Norwegian and a Filipino woman abducted last month in the Philippines. The Philippine army said on Wednesday, Oct. 14, 2015, that authorities were trying to verify the authenticity of the video, adding that the military would reject any demands from the militants. (Militant Video via AP)

A MILITARY operation has been going on for some time for the rescue of three Westerners and a Filipino woman abducted by gunmen from the resort island of Samal in Davao del Norte province in September, but the operation did not become known until a video showing the hostages pleading for a stop to the assault on the kidnappers’ lair surfaced on Tuesday.

The 2-minute-23-second video posted on YouTube by user Darthodieus on Tuesday and circulated online by the US-based SITE Intelligence Group showed Canadians John Ridsdel and Robert Hall, Norwegian Kjartan Sekkingstad and Filipino Maritess Flor appealing to the Philippine government to stop the artillery fire, which one captive said hit close to them, and calling on their governments to negotiate for their freedom.

The video showed the glum-looking hostages sitting in a grassy clearing with a dozen mostly masked gunmen standing behind them. Two black flags associated with the Islamic State group were hung in the backdrop of lush foliage.

One of the hostages, who identified himself as Ridsdel, spoke as a long-haired captor held his head and aimed a machete on him.

Ridsdel said there had been artillery fire nearby, flights overhead and bombings, and asked that they be stopped. “Please, stop all these operations so that negotiations can start,” he said.

“We beseech the Canadian government to please, please help us and the Philippine government … by stopping all of the operations that have been going on like artillery fire, which came near us,” he said.

A man who introduced himself as Hall also spoke, pleading for help.

“To my family and friends, I am OK, but I am in grave danger,” Hall said.

“I encourage you to please contact the Canadian government and ask them, plead with them to cooperate with the Philippine government to stop the bombings and the problems going on here. I know there are people who can find a way to do this. Please, please help us,” he said.

A third man, who identified himself as Sekkingstad, called on the Bangayan family, which owns the marina at the Holiday Oceanview resort hotel where he and the three others were seized on Sept. 21, to deal with the kidnappers.

“Please meet their demands or else we will be possibly dead,” he said.

One of the gunmen, reading a statement in English, said the kidnappers would not negotiate for the captives’ release unless the military operation was halted.

The gunman said his group would negotiate with the Canadian and Philippine governments and would issue their demands once the military assault stopped.

The gunmen then erupted in yells of Allahu akbar, or God is great.

The woman seated beside Hall, possibly Flor, did not speak.

The Philippine Army identified the four in September as having been taken hostage.

This was the first video released since they were taken.

The Armed Forces of the Philippines and the Philippine National Police Wednesday said they were verifying the authenticity of the video.

A spokesperson for the security forces, however, declined to comment about the military operations to avoid “jeopardizing” the lives of the hostages.

“We are currently studying and evaluating the video and its content and cannot provide any further comment on the matter until such time that we have our thorough assessment,” said Col. Restituto Padilla, spokesperson for the AFP.

“We beg the indulgence of the public and our friends in the media that we cannot divulge operational details and discuss way ahead recommendations that may put in jeopardy the lives of the hostages,” Padilla said.

“Both the AFP and the PNP would like once again to emphasize that our primordial concern is the safety of the [hostages] as well as those of our troops and police officers,” he added.

Chief Supt. Wilben Mayor, spokesperson for the PNP, said the video was going through “authentication” at the PNP Anti-Cybercrime Group.

Malacañang said the government’s primary objective was to ensure the safety of the hostages.

“[The] government’s aim is to ensure their safety and secure their release and all actions emanate from this,” said Communication Secretary Herminio Coloma Jr.

Brig. Gen. Allan Arrojado, commander of Task Force Sulu, said he was uncertain whether the video was taken in Sulu.

“This could be a mock setting in some forested area to make it appear that they are in the forests of Sulu,” Arrojado said.

Cmdr. Roy Vincent Trinidad, chief of the Naval Forces in Western Mindanao, said the military was trying to determine where the video was taken and who the kidnappers were.

Trinidad said the military was also checking the identity of the person who posted the video on YouTube.

“There is more than meets the eye and we are confident that the people we tapped to preview this can extract more details for our next move,” Trinidad said.

Arrojado said there were military operations, but these were against the al-Qaida-linked Abu Sayyaf bandits holding hostages and he could not just order a halt without orders from higher commanders.

“We are just performing our mandate and our mandate [is to] fight the Abu Sayyaf group and rescue the hostages safely,” he said, adding that the operations started in 2014.

He said the operations were centered on the towns of Patikul, Indanan, Parang and Talipao in Sulu.

Habib Hashim Mudjahab, chair of the Islamic Command Council, a faction of the Moro National Liberation Front, said the kidnappers in the video appeared to be from Sulu, as they spoke Tausug.

Arrojado said the gunmen’s spokesperson in the video spoke “Malaysian English.” With reports from Jaymee T. Gamil and Nikko Dizon in Manila, AP