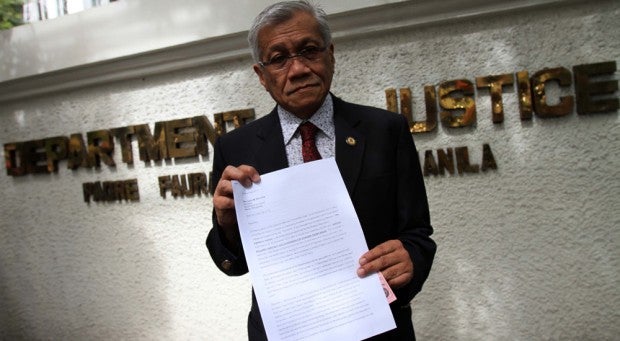 LUCENA CITY—Former Akbayan Rep. Walden Bello has declared his candidacy for senator to promote an “electoral insurgency” against traditional politics.

“I am running to promote an electoral insurgency against politics-as-usual, injustice, inequality, and corruption,” Bello said in a statement sent from the US late Tuesday.

He said he swore to his certificate of candidacy (COC) before Philippine Consul General Generoso D.G. Calonge at the Consulate General in Chicago, ‎Illinois on Monday. He sent his COC to Manila to be filed by someone he authorized, as provided for by the rules of the Commission on Elections.

Bello described his independent bid as an “uphill struggle against the Darth Vader of money, ambition, and brazen power that is traditional politics.”

“But like Luke Skywalker, I am not one to walk away from a challenge,” he said.

He explained that he is running as an independent to underline to the voters that “I am my own man.”

He said the groups backing him in his candidacy—civil society networks, progressive organizations, overseas Filipino workers and individuals—do not want his campaign to be sullied by association with traditional politicians.

“We are not, however, ruling out supporting individual candidates that have a good record and have similar stand as ours,” Bello said.

But he added: “Backing (Mar) Roxas, (Grace) Poe, (Jejomar) Binay and (Rodrigo) Duterte is out of the question. They represent the old, poisonous politics.”

Bello warned candidates who control politics with their money, power, and ambition: “May you rot in hell. We will prevail.”

Bello, then a staunch ally of President Benigno Aquino III, cut his ties with the administration coalition last March and resigned as Akbayan party-list Representative in Congress over what he considered a Malacañang cover-up of the Jan. 25 clash between police commandos and Moro rebels in Mamasapano, Maguindanao province that left 44 police officers dead.

He also disagreed with President Aquino over the Disbursement Acceleration Program, which the Supreme Court struck down as unconstitutional and the president’s retention of several Cabinet members all of whom he described as “dead weights.” Delfin T. Mallari Jr./RAM