SAYING she had won the fight against the Big C, Sen. Miriam Defensor-Santiago is now gearing up to surmount another challenge—that of running for President for a third time.

Looking hale and hearty, Santiago Tuesday announced at the relaunch of her book, “Stupid is Forevermore,” her plan to seek the presidency in next year’s elections and said she already had a running mate waiting in the wings.

The 70-year-old declined to name her potential vice presidential candidate, fearing his wife might scold him. She let out that he had in fact declared he wanted to become Vice President.

“If I become President sometime in the very near future, this country will be much better than it was before,” she said, drawing applause from her supporters.

Asked if she was 100 percent sure of running for President, she replied: “Well, unless I get struck by another bout of cancer, but it doesn’t happen that often.”

In July last year, Santiago announced that she was battling stage 4 lung cancer. Prior to that, she had been on medical leave from the Senate due to chronic fatigue syndrome.

Santiago said she planned to end her career the same way she started it—in government service.

“I will run because I’ve already gotten over my bout with cancer and there’s nothing left to do. I can apply for a job abroad like the one I lost because of my cancer,” she said, referring to her appointment as a judge in the International Court of Justice in The Hague.

“But I think since I have served the government from the very beginning, I will end my career here,” she said.

But she answered in the affirmative when asked if she would file her certificate of candidacy for President. She also took note of the response of the crowd, some of whom kept on calling for her to seek the presidency.

Santiago said she planned to run under her People’s Reform Party, the same vehicle she used for her unsuccessful 1992 run for the presidency.

She also disclosed that she would also have senatorial candidates, but she declined to provide names.

Trust in the Lord

Santiago announced her 2016 plans in a brief press conference after the relaunch of her best-selling book “Stupid is Forevermore,” a sequel to the book “Stupid is Forever.” The two books feature the senator’s wry or humorous one-liners on a range of topics, including politics, religion, morality and romance.

At the relaunch, her staff members came in red shirt with the phrase “#Miriam2016” printed at the back. Her supporters also carried banners with the phrases “Miriam Ikaw Na!” and “We Want You President Miriam.”

In her remarks, Santiago lamented that the Philippines “suffers from a malaise of plunder.” 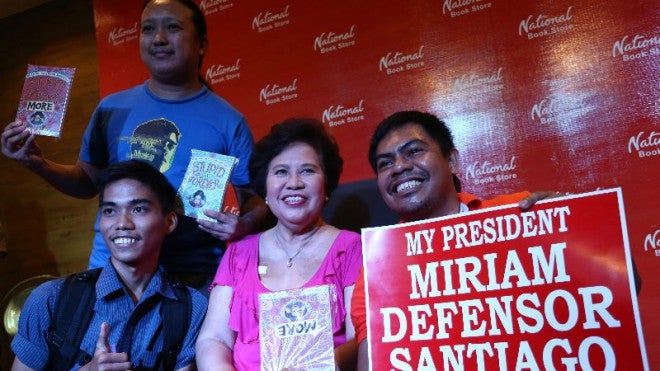 NEVER SAY DIE After recovering from stage 4 lung cancer, Sen. Miriam Defensor-Santiago goes all in with another make-or-break run for the presidency. She unveiled her political plan at the relaunch of her book, “Stupid is Forevermore.” KIMBERLY DELA CRUZ

“Plunder is when you look at one person and the other person looks at you, and you feel like eating each other up. It’s like cancer,” she said.

“We will try and make this country better simply by trusting in the Lord, trusting in yourself, trusting that you yourself will lead to God’s great heaven up where we know he lives,” she added.

Santiago also updated her crowd of supporters about her health. Cancer, she said, was not what it was before. “Nobody dies of cancer anymore as long as you have the money,” she said.

Her faith also helped her overcome her condition. “Because I have great faith in Our Lord, I was able to conquer cancer. In only about six months, the cancer tumors already died,” she said.

Santiago first ran for President in 1992, when she placed second in the hotly contested race to Fidel Ramos, who won by the skin of his teeth in the dark. She claimed votes for her were snatched during the counting in the midst of power outages. She also ran for President during the 1998 polls, and finished seventh among the candidates.

She was more successful in running for the Senate. Before that, Santiago served as immigration commissioner during which she battled Yakuza-led crime syndicates and claimed “I eat death threats for breakfast” at the time.

For cleaning up the graft-ridden agency, she received the Ramon Magsaysay Award for government service, Asia’s equivalent of the Nobel Prize. She also was a no-nonsense Regional Trial Court Judge in Quezon City.