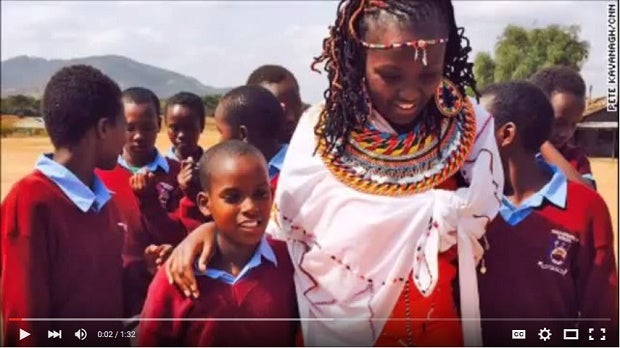 Thirteen-year-old Younis (left) is rescued from her marriage to an 82-year-old man by Josephine Kulea (right), head of the Samburu Girls Foundation. SCREENGRAB from YouTube

A 13-year-old girl from Kenya was rescued from her traumatic marriage to a man old enough to be her grandfather, a CNN report said.

The report said that Younis was forced to marry a 78-year old man when she was nine years old as part of the Samburu tribe tradition.

“When I was about nine years old, my father married me off to an old man who was 78 years old. I went to his home and I stayed with him [for] one week. He told me that I will be [his] wife but I was just innocent, I wanted to go to school. But that man wanted me to be [his] third wife. I told him, I will not be your wife, and he caned me,” Younis told CNN.

Younis recalled how she escaped from her four years of traumatic marriage and was rescued by a girls’ foundation.

“Then I heard that there is a woman who helps children. I came from Baragoi barefoot, I didn’t even have shoes that day,” she recalled.

Younis was rescued by Josephine Kulea through her Samburu Girls Foundation.

“Kulea took me to [the] children’s office, she rescued me,” she said.

The report said Kulea is fighting against the Samburu cultural traditions she grew up with.

“I realized we are the only ones doing FGM [or] female genital mutilation, the other communities [are] not doing it,” she said.

“I came to realize that there are things that are not right and I need to make a difference, that’s how I started rescuing girls,” she added.

Younis was only among the girls rescued by Kulea in their community. Among her first rescue were her cousins.

The report also said that in 2011, FGM and early marriage were made illegal in Kenya.

“There is hope. And I know when we take more kids to school in future there will be a difference in my community,” Kulea said. NC/RAM