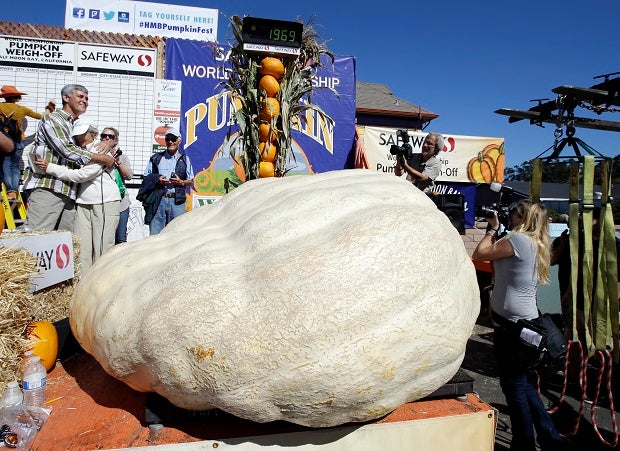 Steve Daletas, left, of Pleasant Hill, Oreron gets a hug from his mother Jeannette after his pumpkin, weighing in at 1969 pounds, won the Annual Safeway World Championship Pumpkin Weigh-Off Monday, Oct. 12, 2015, in Half Moon Bay, California. AP

Growers gathered with their gargantuan offerings to try to break the world record of 2,323 pounds (1,054 kilograms), which was set by a Swiss grower during a competition in Germany last year.

But the winning entry at the Safeway World Championship Pumpkin Weigh-off in Half Moon Bay, south of San Francisco, was no small feat. Steve Daletas of Pleasant Hill, Oregon, won $12,000 for his lumpy, 1,969-pound (893-kilogram) pumpkin.

“It’s been a good year,” he said after the contest. “I’ve never grown an official 1,900-pound pumpkin before.”

Forklifts and special harnesses carefully placed the massive pumpkins on an industrial-strength digital scale with a capacity of 5 tons as officials from the county agricultural commissioner’s Office of Weights, Sealers, and Measures kept close watch.

Second place went to Ron and Karen Root of Citrus Heights, California, for their 1,806-pound (819-kilogram)entry. A $500 prize also was awarded to the “most beautiful” pumpkin based on color, shape and size.

With California in its fourth year of drought, some said the dry soil deflated their pumpkin-growing dreams.

Grow your own veggies–in a cabinet, with no soil

DOH: Fistful of fruits, veggies a day to keep you healthy, cancer-free