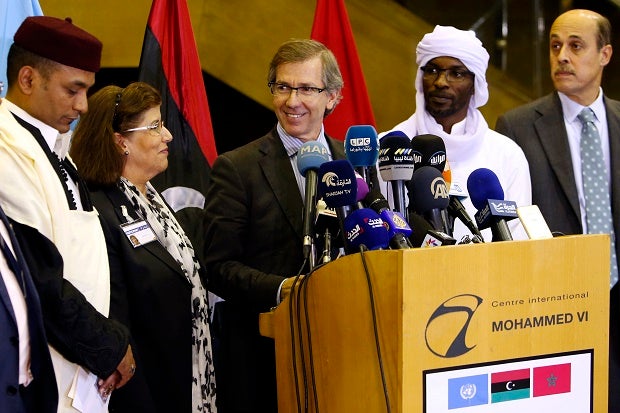 United Nations envoy for Libya Bernardino Leon, center, makes an announcement to the media in Skhirat, Morocco, Thursday, Oct. 8, 2015. The UN envoy for Libya has proposed a national unity government for Libya after months of difficult talks between the north African country’s two rival governments, but now it’s up to the two sides and Libyans themselves to approve it. AP

SKHIRAT, Morocco — The UN envoy for Libya has proposed a national unity government for Libya after months of difficult talks between the north African country’s two rival governments, but now it’s up to the two parliaments and Libyans themselves to approve it.

Bernardino Leon told a news conference late Thursday that the names of candidates for the national unity government have been decided.

The announcement is a step toward stitching together the oil-rich but chaotic country that fell apart after the overthrow of former dictator Moammar Gadhafi in 2011. The country has been split between an Islamist-backed government based in Tripoli and an internationally recognized government in the country’s east.

Though the UN reported Thursday’s news in a tweet saying “Bernardino Leon announcing now formation of Government of National Accord,” more work remains. Negotiators who attended the peace talks representing the rival governments approved the names of candidates, but the parliaments for both sides must approve them, too.

It was not immediately clear whether both camps were fully behind the list of candidates, especially with the Tripoli-based government split between hard-liners and a more conciliatory faction.

Leon said the proposed prime minister for the new government is Fayez Sarraj, a member of the Tripoli-based parliament.

“We believe this list can work,” Leon said of the names, which include three deputies for the prime minister — representing the country’s east, west and south — and two ministers to complete a presidential council.

“All of them will work as a team,” Leon said. He added, “This was not an easy task.”

Mussa al-Kouni, one of the proposed deputy prime ministers, said: “The hardest part has just begun.”

Naima Jibril, a judge and member of the Libyan National Dialogue Commission, praised the inclusion of two women ministers in the list. “Libyan women are capable of playing successful roles in future government,” she said.

The UN envoy had expected to announce a national unity government Wednesday, just the latest in a series of deadlines the UN and the international community had been pushing the rival governments to meet in recent months.

Last week, US Secretary of State John Kerry, UN Secretary-General Ban Ki-moon and others at a high-level UN meeting urged the governments to act quickly and reach a deal, warning that the instability in the country was giving room for extremist groups like the Islamic State to expand.

In addition, Libya’s chaos has opened the door to a surge of migrants and refugees who set off from its coast in often rickety boats operated by smugglers. Many have died on the journey.

The peace talks have been fragile. On Monday, the internationally recognized government voted to extend its mandate past the Oct. 20 deadline that was part of a political roadmap sketched out after Gadhafi was overthrown, signaling a lack of confidence in the UN’s efforts.

A new unity government has multiple challenges, including an economy near collapse, a number of active militia groups and severe needs for basic assistance.

The UN says an estimated 2.44 million people in Libya — nearly 40 percent of the country’s population — are in need of protection and some form of humanitarian aid.

“I think there is no better chance, and there is no alternative to this approach and to this sort of government, which tries to balance a lot of different interests,” said the British ambassador to Libya, Peter Millet. “So I appeal again to the Libyan people to get behind it and give it the best possible chance for success.”