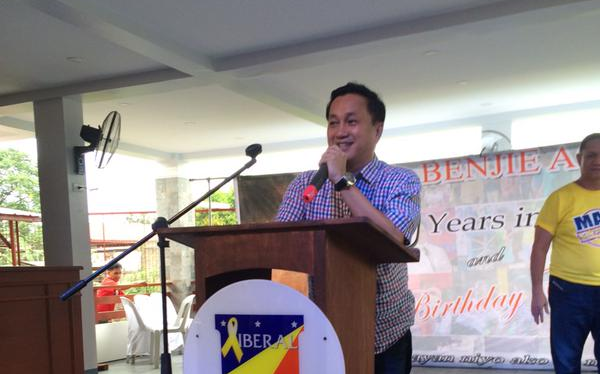 Francis Tolentino’s “mistake” of having scantily clad women perform obscene acts during a gathering in Laguna does not reflect his “totality,” according to Liberal Party standard-bearer Mar Roxas. INQUIRER PHOTO

Liberal Party standard-bearer Mar Roxas has maintained that the “mistake” of having sexy dancers perform in a post-LP event does not reflect the character of resigned Metropolitan Manila Development Authority Chair Francis Tolentino and his service to the public.

“I want to say that this mistake does not reflect the totality of Francis Tolentino and his service for our people,” Roxas said in a statement on Wednesday.

Tolentino earlier issued a public apology to Roxas and LP, which had been considering him in its senatorial lineup, and asked the party to drop him from the slate.

He also stepped down from his post as MMDA chair amid allegations he sent the female dancers as surprise birthday gift to Laguna Rep. Benjie Agarao during a party held after an LP gathering in Sta. Cruz town.

The suggestive and “lewd” show was held after the mass oath-taking of new LP local officials led by Roxas.

“As regards the recent incident in Laguna, it was a mistake, and I appreciate that Chairman Francis Tolentino has acknowledged this,” added Roxas.

For letting go of his chance to be selected as one of the LP senatoriables, Roxas lauded Tolentino for being a “true believer of daang matuwid.”

Being both members of the Cabinet, Roxas said Tolentino, a known close friend of President Aquino, was easy to work with.

“Sa panahon namin sa gabinete, napakadaling katrabaho ni Francis. Malaki ang kanyang naiambag sa pagbabago. We worked very closely with him during times of disaster, and as MMDA chair, he always sent help where it was needed, regardless of whether or not the disaster area was within Metro Manila,” he said.

He also thanked Tolentino for his dedicated service, citing the success of the MMDA’s engagement with the public through its Twitter account and its smartphone application.

But Roxas said LP had to investigate the incident as he and the party “believe that how you campaign is a reflection of how you are going to govern.”

Tolentino denied hiring The Playgirls for Agarao’s party but he owned up to the mistake of not stopping the dancers when they started simulating various sexual acts in front of LP members and even minors.

“This has also prompted us to take a hard look at how we are conducting, and how we are to conduct, our campaign. Layunin namin palagi ang pag-angat ng antas ng pampublikong diskurso, to always appeal to our better angels kumbaga,” said Roxas.

Roxas then asked his fellow LP members to adhere to the objective of the party.

“Ours is a party united by principle, at ipagpapatuloy naming lumaban nang patas para ituloy ang pagbabago. We will continue striving to empower each and every one of our countrymen to help accelerate our collective pursuit of prosperity,” he said. Julliane Love de Jesus/RC