At 17, she found herself with a broken home and nowhere to stay | Inquirer News
Close
menu
search

At 17, she found herself with a broken home and nowhere to stay 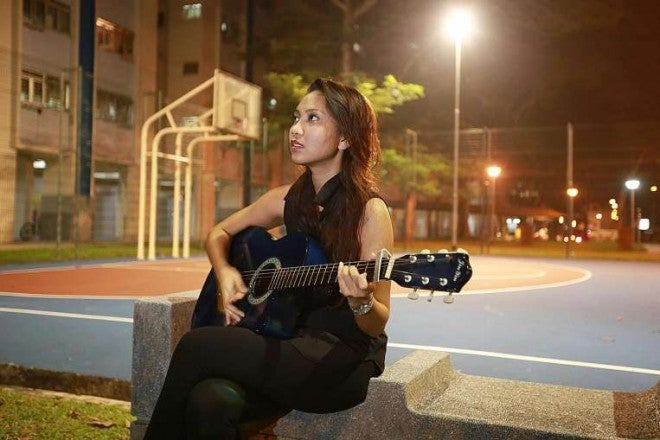 SINGAPORE—Six years ago in September, Rohaishah Hamid’s life spiralled into a vortex of bleakness and unpredictability.

Her folks divorced, leaving her and her mother without a roof over their heads. They could not afford to rent and no one they knew could offer both of them a place to stay. So mother and daughter had to separate.

A family friend took her mother in while Ms. Rohaishah, then just 17, bunked in with various classmates and buddies. It was not always possible so on more than one occasion, she had to stay up at void decks or the beach.

There were other problems.

Then studying at the Nanyang Academy of Fine Arts (Nafa) on a teaching scholarship, her $800 monthly allowance was not enough for her sickly mother’s medical bills and other expenses, let alone materials for her art assignments.

She skipped many classes and failed several modules. Nafa threatened to expel her; the Ministry of Education (MOE) wanted to withdraw its scholarship.

It took a lot of pleading before she was given a second chance.

“It was one of the most demoralizing periods in my life,” says Rohaishah, now 24.

Fortunately her many good friends and an art teacher from her secondary school kept her spirits up and made sure she did not fall over the precipice.

Today, Rohaishah smiles a lot more and breathes much easier.

She is happily settled in a rental flat with her mother. Not only had she graduated from Nafa and completed her teacher training, but she has also found a fulfilling job as an art teacher in Peirce Secondary School. And earlier this year, she won the award for being the school’s Most Engaging Teacher.

“People thought I was a minah and that I would not make it but I did,” she says, using the colloquial term to describe rowdy Malay girls without drive or ambition.

Vivacious and articulate with the quiet confidence of one who has beaten the odds, she is the younger of two girls. Both her parents were musicians. Her father was a band guitarist, and her mother, a singer.

Her early childhood, spent in Bedok, was uneventful.

“Both my parents were around. They worked at night, I saw them in the day and I had enough food to eat and nice clothes to wear,” says the former student of Nan Chiau Primary.

Life, however, changed when her family moved to a four-room flat in Sengkang when she was 10.

The following year, her sister – who was 13 years older and to whom she was very close – died after giving birth to her first child.

Plagued by diabetes and high blood pressure, her mother became too sickly to work. Not long after, her father left home.

“That’s when it became rocky and depressing for me. My friends had normal families, they had enough pocket money,” she says. “And then there was me. Sometimes I had $2, sometimes none at all,” she recalls.

To make ends meet, she started working part-time at Kentucky Fried Chicken when she was 14, pulling in about $300 a month. The amount was not enough to settle bills or pay for food and her mother’s medication.

Although young, Rohaishah had the presence of mind to seek help from various family service centers and organizations.

“Still, there were days when I didn’t have food to eat. And sometimes the flat was all dark because we did not have money for the electricity bill,” she says.

Because of what she had to deal with, her studies suffered.

She started skipping school, preferring to take her mind off things by hanging out with her friends.

“I had different types of friends, from tudung-wearing types to badass ones with tattoos,” she says with a laugh. “But when I hanged out with the tough types, I didn’t do the things they did. I just liked their company because they made me feel accepted and they didn’t judge me,” she says.

Music gave her refuge from all her frustrations.

“I would jam with friends,” says Rohaishah who taught herself to play the drums and the guitar.

“The drums were the best thing for someone like me because I would go ‘ahhhhhhh’,” she says, flailing her arms and shaking her head violently to indicate aggression.

Rohaishah also found catharsis through penning lyrics and performing in underground concerts with alternative bands such as Radiant Archery and A Vacant Affair.

Asked how she would rate herself as a singer, she lets out a chortle.

“It wasn’t about sounding nice. There was a lot of anger and sadness,” she says.

With so many difficulties weighing her down, she started doing badly in school.

“I was failing and close to being ‘demoted’ to the Normal stream,” says the former student of Compassvale Secondary. “Luckily, I buckled down and passed my O levels.”

She credits her art teacher, Ms. Ng U-Lynn, for being her pillar of strength and for changing her life.

“She was amazing, and inspired me a lot,” she says, adding that Ng went beyond the call of duty to encourage and motivate her. “She encouraged me to take up a teaching scholarship and study art at Nafa so that I can become an art teacher.”

She did just that. However, her life was soon rocked by even more turbulence.

When she was 17, her parents finally got divorced. The Sengkang flat they were living in was sold and whatever payment her mother got went into repaying debts.

The next three years were traumatic; she was left to fend for herself and often did not know if she would have a bed to sleep in each night.

“I had to keep texting a lot of friends: ‘Hey, can I stay with you? Whatever responses I got would determine if I had a place to stay. There were days when my friends could not take me in and I would end up at the beach or in a void deck,” she says. “I had a backpack, with my school work and art materials, and another bag with all my clothes.”

It was a horrendous period.

“I skipped school a lot because I had no money. I couldn’t buy materials which meant that I couldn’t do my art assignments. What was the point of attending classes when I had nothing to turn in?” says Rohaishah, who failed several modules.

She knew some classmates judged her.

“It was disappointing. They went: ‘What are you doing? Why mess everything up?’ But in my heart, I said: ‘If you’re not going through it, you wouldn’t know how hard it is’.”

Because of her grades and attendance record, she could not graduate after three years.

She had to persuade both Nafa and MOE – which withdrew its monthly allowance – to let her retake her modules.

“I had to pay to retake the modules so I started working part-time again. I did everything I could lay my hands on – waitressing at banquets jobs, washing cars, distributing fliers and administration work,” she says, adding that she earned about $1,200 a month.

The money allowed her to rent a room so that she could be reunited with her mother. But because she was spending so much time at work, she neglected her studies and failed some of her modules again.

MOE was not only going to terminate her bond, but it also wanted her to pay back what they had invested in her.

“And Nafa was going to expel me. So I pleaded and begged and spoke to MOE and all my lecturers. After a lot of consideration, they decided to give me one more year.”

This time, she really pulled her socks up. “I told myself: ‘Die, die must pass’,” she says, lapsing into Singlish. “If I messed it up, I would lose everything. And the prospect of having to pay back thousands of dollars was very scary.”

Meanwhile, Ng did not give up on her. “She kept reminding me why I took up the Nafa course and why I wanted to become a teacher. She told me there was a reason I had to go through these tough times. She said they would give me a lot of lifeskills that I could transfer to my future students. I tell my students I am now a teacher because of Miss Ng.”

Life got a lot better after she graduated from Nafa in 2013.

She got a decent stipend while pursuing her diploma in education, and also finally managed to secure a rental flat in the Sin Ming area from the Housing Board where she now lives with her mother.

With no major worries to plague her, she did well at the National Institute of Education and achieved a grade point average of 3.7 out of 4.

Last year, she was posted to Peirce Secondary School as an art teacher.

She loves, she says, what she does. Obviously her students do too because through their votes, she won the Most Engaging Teacher award this year.

Like her mentor Ng, she has a soft spot for students from dysfunctional families or those with financial problems.

“When I talk to them, I don’t probe but I share. I tell them that they’re not alone and that I know how hard it is,” she says.

“I tell them that they can lose things but they must never lose themselves because the day that they do, they will also lose hope.”

She has no hang-ups about what she has gone through. In fact, she recently wrote a Facebook post chronicling her trials and tribulations. The post has gone viral.

“It helps me remember what I am here for. God doesn’t give the toughest battles to the weakest people; he gives it to the strongest ones.”

Bank helps save kids from the streets