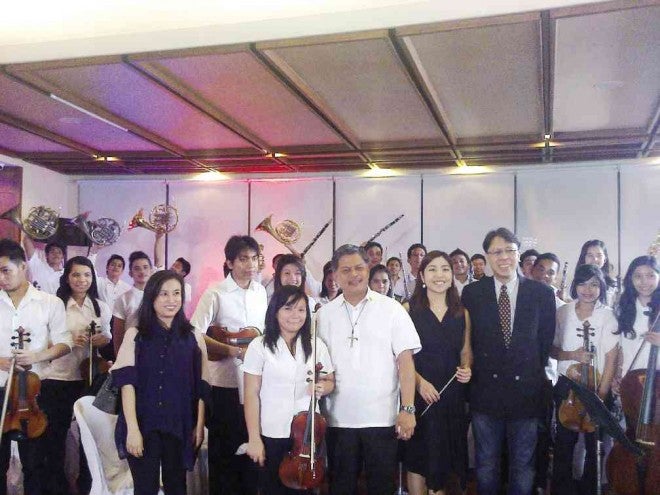 Lui Santos says his dream is to be able to play Tchaikovsky’s violin concerto in D major, one of the most difficult violin concertos. But first he needs to master his musical instrument of choice. 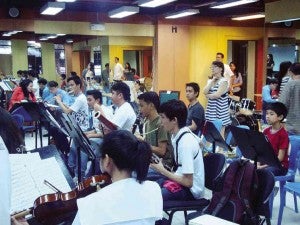 The son of a company driver and an empanada vendor in Malabon, Santos is among the 120 young musicians from underprivileged communities in Metro Manila and Rizal, Aurora, Batangas, Cavite, Cebu and Samar provinces who are receiving free music education from Ang Misyon: Sistema for the Filipino Youth.

The 19-year-old violinist joined the Orchestra of the Filipino Youth (OFY), which is under the auspices of Ang Misyon, in 2012, the year he took a leave of absence from the University of the Philippines (UP) Diliman because his parents could not afford the P8,000 tuition. He is now the OFY’s associate concertmaster.

“Music has the power to transform lives,” says concert pianist Jovianney Emmanuel Cruz, who cofounded Ang Misyon in 2012 to develop the talents of indigent children for a possible career in music. He says that Ang Misyon is patterned after Venezuela’s El Sistema, economist and musician Jose Antonio Abreu’s music education program for kids in impoverished areas to help keep them away from drugs and crimes. 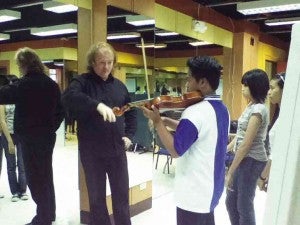 Its Philippine counterpart, Ang Misyon, is said to be the first in Southeast Asia. The program handpicks young musicians from various existing ensembles and gives them a curriculum that covers music history, music theory and fundamentals, basic piano, basic conducting, one-on-one lessons on the instrument of concentration, group or sectional workshops, and chamber music.

A multiawarded concert pianist who serves as the OFY’s artistic director, Cruz believes classical music education and performance can be a vehicle for growth and success for Filipino children, especially those coming from underprivileged families.  “The arts are really our forte. That’s our image in the international community,” he says.

His wife, Tinky Cruz, who is the OFY’s managing director, says they try to do their best to help OFY members “reach their full potential” by giving them financial aid for their academic education and by inviting foreign mentors, such as British concert violinist Robert Atchison and Russian conductor Alexander Vikulov, for their music education.  The young musicians also receive rehearsal and transportation allowances, and meals. 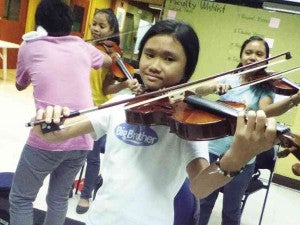 To help out-of-school youth, they organize house-to-house soirees at posh subdivisions to raise funds for tuition. “We gather our out-of-school members and prepare a 30-minute program that they can perform from house to house in villages like San Lorenzo, Alabang and Forbes Park,” she says.

Some families donate money while others provide instruments. At one of their performances in Alabang, they received as much as P150,000. The donation enabled Ang Misyon to send three of its members to the Philippine Women’s University.

Santos says he is going back to school next semester as an irregular fourth year music student. Tinky says they have raised enough money to enroll him at the UP College of Music. It took them a while because they first had to pay his overdue loan, she adds.

Unlike El Sistema, which is funded by the Venezuelan government, Ang Misyon is a privately supported joint venture of First Philippine Holdings Corp. and ABS-CBN Corp. 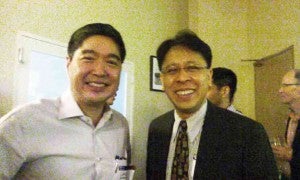 Budget flight carrier Cebu Pacific flies aspiring musicians from the provinces to Metro Manila for auditions and rehearsals, as well as transports the ensemble to different  places for their performances.

The youth orchestra was originally envisioned to be a training ground for poor yet talented children from all over the country so they may later join the ABS-CBN Philharmonic Orchestra, just as, in Venezuela, musicians who graduate from El Sistema’s National Children’s Youth Orchestra move on to the Simon Bolivar Symphony Orchestra.

But Cruz says graduates of the OFY are not guaranteed spots in the ABS-CBN Philharmonic. They will still have to audition and compete with older and perhaps more experienced musicians. 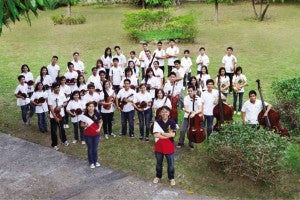 THE YOUNG orchestra on a mission, with Shangkuan-Cheng and artistic director Cruz

To help prepare the young musicians for the bigger challenge of joining a professional orchestra, OFY graduates and members have to either give music lessons to children in their own communities or assist their mentors.

“We did research and found out that every barangay has some kind of music ensemble. Our banda culture has been around since the Spanish era,” Cruz says.

OFY cellist Georgette Tirado, who is also a pharmacy student at Centro Escolar University in Makati City, teaches members of the Angono Youth Symphony Orchestra in Rizal to play the cello.  Senior OFY members like Santos assist mentors in Ang Misyon satellites in Cavite, Angono and Taytay (Rizal), Guadalupe (Makati) and the cities of Caloocan, Las Piñas, Muntinlupa and Parañaque.

“We formed the OFY so we’d have a model,” says  Cruz, “and all these young musicians can go back to their communities and infect everyone.”

Just imagine the impact if they teach music in their communities in Caloocan, Taytay, Angono, Cavite or wherever, he says, “if they’re able to ‘infect’ even one person and show that person that this is how things in the Philippines should work.” 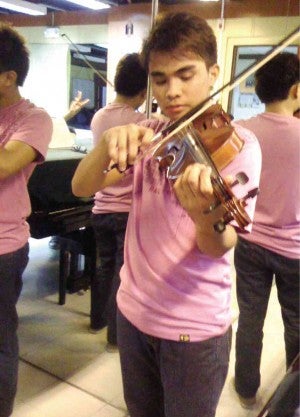 Cruz, who graduated from  the Manhattan School of Music, points out that music is not just about reading notes or playing instruments, but also discipline. “It requires patience, resilience, determination, dedication and loyalty,” he says.

Some OFY members may not pursue careers in music but

Ang Misyon will have instilled in them at least these values, the concert producer adds. “At the end of the day, our [mission] is to groom them as good citizens of the Philippines,” he says.

“We try to get to know each child. We know who has asthma and who is epileptic. We know who wants to play in Vienna (Austria), who wants to audition at Juilliard in New York, who treats this only as a hobby because they are gifted in physics,” Tinky says.

Parents play a crucial role, Tinky adds. Some accompany their children to every rehearsal and watch every performance.

Lady Fontanilla’s 12-year-old son, Luincy Mercado, is a saxophonist in the OFY.  Mother and son travel together from Batangas to Pasig City to attend rehearsals on Saturdays. The time and effort is worth it, she says, because of the exposure and training that her boy gets. 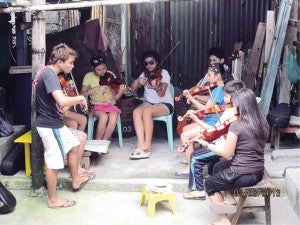 But other parents are not as supportive.

“We have lost four kids to housework,” Tinky says. They try to convince parents to allow their children to continue the lessons after household issues are settled. But they do not force anyone, she adds.

Ang Misyon librarian Emmanuel Prospero says the children come from depressed areas. Some have separated parents and dysfunctional families. Music allows the children to forget their family problems for a while. Prospero, who is fondly called “Tatay” by the members, says they find a “sense of family” with the orchestra.

“In the OFY, we are one big happy family,” says Prospero, who shares his father’s collection of 4,000 music pieces with the members.

At an OFY general assembly, Cruz tells its members: “Ang Misyon is growing faster than we ever expected. We have to be stronger and more resilient as a family. If you, the youth, can be good to one another, the whole country can look up to you on how to be a united family.”

The OFY played recently for President Aquino, who was the special guest at First Gen’s San Gabriel Power Plant groundbreaking ceremonies in Batangas.

Aspiring musicians have to audition at Benpres Building in Ortigas, Pasig City.