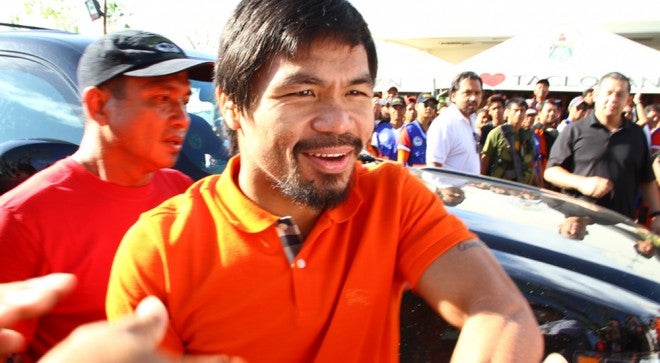 DAVAO CITY, Philippines – Sarangani Rep. Manny Pacquiao sought to disprove critics he would just be another sitting senator by claiming he had authored more than two dozen bills and co-sponsored nearly 75 others as member of the House of Representatives from 2013-2015.

In a statement, Pacquiao admitted that he “will be embracing new levels of responsibility” and “will be confronting tougher challenges” by running for Senate but he was “dreaming bigger dreams for our people and for our nation.”

Pacquiao, who has been Sarangani representative for nearly six years now, has been criticized for being absent from Congress most of the time.

In 2014, he attended just four out of the 70 sessions and is considered one of Congress’ absentee lawmakers along with Negros Occidental Representative Julio Ledesma IV.

But unlike Ledesma, who only authored one bill in 2104, or the much-criticized Laguna Representative Benjamin Agarao Jr. for the twerking incident – who had two bills including the creation of a congressional district in Laguna and the commendation for Megan Young — Pacquiao boasted of the more than 26 bills he had authored and nearly 72 others, which he had co-authored.

Pacquiao also proposed HB03590, which seeks to grant maternity leave benefits of 180 days to women working in both the government and the private sectors, which remains pending at the committee on women.

He also wanted students to have wireless Internet access in all state universities and colleges by filing HB03591, which remains under deliberation at the committee level.

He has proposed to restore the mandatory military training for all students in college by restoring two provisions in the Philippine Reservist Act.

Pacquiao said should he win a Senate seat, he would replicate what he did for Sarangani in other parts of the country but added that for him to do that, he would need the help of every stakeholder.

“It takes a committed team to fulfill a big Sarangani dream,” he said.

Pacquiao declared his Senate run in General Santos City on Monday evening, during the convention of the People’s Champ Movement (PCM) – the local political party he had founded in 2010.

More than 1,000 party officials and members showed up during the convention held at the Family Country Hotel there.

However, Pacquiao did not say which national party he was joining for his Senate run. It was a public knowledge that the Liberal Party had wooed him, with Pacquiao meeting with Caloocan Representative Edgar Erice twice. He also entered into an alliance with the United Nationalist Alliance (UNA). Recently, he also met with Davao City Mayor Rodrigo Duterte.

But he appears open to the idea of running as an independent.

“Let’s join forces and run as independent candidates. All the presidentiables are our good friends. I don’t want to hurt any of them. If we run as independent, it’s up to them if they are going to adopt us,” Zubiri was overheard telling Pacquiao.

Pacquiao, again, did not commit but said “That’s a nice idea.”