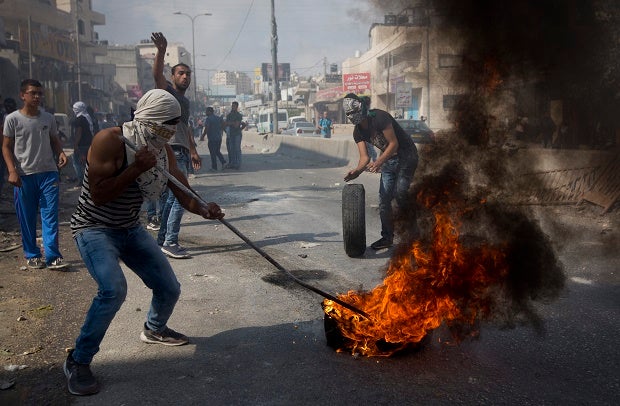 Palestinians burn tires during clashes with Israeli troops at Qalandia checkpoint between Jerusalem and the West Bank city of Ramallah, Tuesday, Oct. 6, 2015. A new generation of angry, disillusioned Palestinians is driving the current wave of clashes with Israeli forces: They are too young to remember the hardships of life during Israel’s clampdown on the last major uprising, and after years of nationalist Israeli governments many have lost faith in statehood through negotiations and believe Israel only understands force. AP

SURDA, West Bank — A new generation of angry, disillusioned Palestinians is driving the current wave of clashes with Israeli forces: Too young to remember the hardships of life during Israel’s clampdown on the last major uprising, they have lost faith in statehood through negotiations, distrust their political leaders and believe Israel only understands force.

The recent re-election of hard-liner Benjamin Netanyahu to a fourth term as prime minster has only deepened the sense of paralysis.

Some young Palestinians say they want to emulate those killed or wounded in confrontations or attacks on Israelis — like Mohannad Halabi, the 19-year-old law student from the West Bank who stabbed to death two Israelis in a bloody rampage in Jerusalem’s Old City over the weekend before being shot dead by police.

“We are all impressed with what he has done,” said Malik Hussein, a 19-year-old friend and fellow law student at Al-Quds University near Jerusalem. “The day after the attack, university students took to the streets and clashed with Israeli soldiers. Mohannad’s way is the only way to liberate Palestine.”

Despite such fervor and a rise in violence, it’s not clear if conditions are ripe for a new uprising against the Israeli military occupation that began in 1967 when Israel captured the West Bank, Gaza Strip and east Jerusalem.

Marked by Palestinian bombings and shootings, the last revolt erupted in 2000 and ebbed after Mahmoud Abbas, an opponent of violence, replaced the late Yasser Arafat as Palestinian president in 2005.

He is trying to prevent an escalation that he believes will cost the Palestinians international sympathy, but can’t be seen as cracking down on what Palestinians view as legitimate resistance to occupation. On Monday, Abbas ordered his security commanders to switch tactics and not use force to prevent Palestinian protests.

Much will depend on the severity of Israel’s response. The most recent attacks killed four Israelis last week — the two Israeli men stabbed by Halabi and a Jewish settler couple killed in a West Bank shooting ambush, in view of their four children.

Netanyahu has threatened a tough crackdown, saying he is sending thousands more police and soldiers to the West Bank and east Jerusalem, with a mandate to take “strong action” against anyone throwing stones or firebombs. In the past, such clampdowns often led to more Palestinian casualties which, in turned, fueled new protests and more bloodshed.

During the last uprising, Israel imposed unprecedented restrictions on daily life in Palestinian territories to try to end attacks on Israelis. Troops sealed off communities, keeping many Palestinians from jobs and schools. Long waits at Israeli checkpoints became common, and in the darkest days, tanks rolled through Palestinian cities and Israeli troops carried out mass arrest sweeps.

When violence ebbed, Israel gradually eased West Bank movement, but continues to restrict Palestinian entry to Jerusalem. Many older Palestinians who lived through those hardships don’t want to go through them again, focusing instead on personal goals, such as getting good jobs and sending their children to college.

The bloody past seems to be less of a deterrent for young Palestinians who hold little hope for a better future, and after years of nationalist Israeli governments, have lost faith in Palestinian statehood through negotiations.

Netanyahu says he is ready to negotiate a partition deal with Abbas, but rejects internationally backed ground rules for such talks and continues to expand Jewish settlements on lands sought for a Palestinian state.

A major Jerusalem shrine that is central to the national identities of both sides and sparked major bouts of violence in the past also looms large in the rising tensions.

Many Palestinians are convinced that, despite Netanyahu’s denials, Israel is trying to expand its presence there by allowing more Jews to visit and restricting the access of Muslims. The compound in Jerusalem’s Old City is revered by Muslims as the spot where Prophet Muhammad ascended to heaven and by Jews as the site of the biblical Temples.

Home to the Al-Aqsa Mosque, the compound was the scene of frequent clashes in recent weeks between Palestinian stone-throwers and Israeli police, and young Palestinians routinely refer to perceived threats to Al-Aqsa in explaining their frustration.

Ahmed Halabi, a 22-year-old cousin of the Jerusalem assailant, Mohannad Halabi, said he hopes a new uprising will erupt.

“What’s going on here is unbearable,” he said. “Al-Aqsa, the settlements, the killing in the streets. We have to move. We cannot stay silent.”

The assailant was one of five siblings and lived with his family in a new two-story home in the West Bank town of Surda, north of Ramallah, the seat of Abbas’ self-rule government. His friends said he was closely following events at Al-Aqsa and supported the militant Islamic Jihad faction, even though he was not particularly religious.

His father, Shafiq, said his son’s violent act came as a surprise, but that he was proud of him. “This generation cannot be controlled by family or any other authority,” he said. “I think Netanyahu will have a hard time with them. Even we, the family, couldn’t tell Mohannad what to do.”

Besides the two Israeli men killed in the attack, the wife and 2-year-old son of one of the men were wounded. Adele Banita, the wounded woman, told Israeli media that Arab bystanders laughed and spat at her when she pleaded for help.

Early Monday, Israeli troops searched and measured the Halabi family home, presumably as a prelude to demolishing it, a controversial punitive practice Israel has revived. After the soldiers left, a cousin, 16-year-old Majd al-Aryan, plastered posters of the attacker on the walls of the house.

“Mohannad is a hero and everyone on town wants to be like him,” he said. “We are proud of him.”

Over the past week, confrontations between Palestinian stone-throwers and Israeli troops firing tear gas, rubber-coated steel pellets and live rounds erupted in several parts of the West Bank and in east Jerusalem. Two young Palestinians were killed by army fire Monday and dozens were injured in the clashes.

Many of the protests appeared to be spontaneous, or arranged informally via social media, rather than by the two main Palestinian factions, Abbas’ Fatah and its main rival, the Islamic militant Hamas.

A senior Hamas official in the West Bank said his group encourages confrontation with Israel in principle, but doesn’t want to send too many activists into the protests because of concerns they might be arrested by Israel or Abbas’ security forces. He spoke on condition of anonymity for fear of repercussions.

On Tuesday, Palestinian factions called for a protest march at the main Israeli checkpoint between the West Bank and Jerusalem. Senior Fatah officials were absent and other politicians from Hamas and smaller factions left before dozens of youths, most of them school-age boys, began throwing stones.

Bassel Obeida, a 21-year-old protester, said the unrest would continue regardless of the decisions of the Palestinian leadership. “If Abbas is against us … we will reject his words and start the intifada,” he said. “We don’t want any leaders here to show us what to do.”

Read Next
Mexico City investigates reports of dog poisoning at park
EDITORS' PICK
Unleash the photographer in you this World Photography Day with vivo smartphones
What to watch out for when selecting a video surveillance solution
Look Through: The fate of impounded stray dogs
House energy committee chair Arroyo bats for cheap electricity
Palace warns sugar hoarders after raid on Pampanga warehouse
Metro Manila’s COVID-19 cases on downward trend, but surge not over — OCTA
MOST READ
LOOK: Miel Pangilinan dazzles in glittery pre-debut shoot
Remains of two children found in suitcases auctioned in New Zealand
Palace warns sugar hoarders after raid on Pampanga warehouse
Alice Dixson to critics of her yellow gown at GMA Gala: ‘’Wag masyadong judgmental’
Don't miss out on the latest news and information.