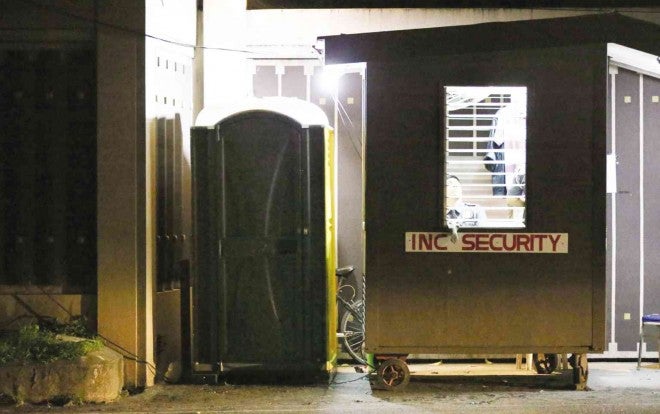 ‘BLOCKADE’ The portalet and guardhouse at the gates of 36 Tandang Sora Ave., Quezon City. LYN RILLON

A GUARDHOUSE and a portable toilet blocking the gates, food deliveries stalled or turned away, more security cameras keeping watch, and a disconnection notice over a P1.3-million electricity bill.

These are the ways Felix Nathaniel “Angel” Manalo and Lolita “Lottie” Manalo continue to be pressured by the Iglesia ni Cristo (INC) despite an earlier compromise agreement with the leaders of the influential religious group, according to the siblings’ lawyer.

Trixie Cruz-Angeles on Monday told a Quezon City court that the INC had “stepped up the harassment” of her clients, the younger brother and sister of INC Executive Minister Eduardo Manalo, who have remained in the two-hectare Iglesia-owned compound at 36 Tandang Sora Ave., Quezon City, since their expulsion from the church in July.

Angeles filed a manifestation in the Quezon City Regional Trial Court Branch 222 during a hearing on an INC petition that seeks to prevent Angel and Lottie from receiving visitors on the compound purportedly for security reasons.

In the last hearing on Sept. 29, both parties agreed to a compromise pending the court ruling on the INC’s petition for a temporary restraining order (TRO). Under the provisional agreement, the Manalo siblings would submit a list and photos of occupants and visitors at the compound, while the INC could post guards at the gate.

But Angeles asked the court to order the removal of the recently installed guardhouse and portable toilet at the gates, saying the INC was using them to enforce a “blockade.”

The lawyer also called for the dismantling of security cameras directed at the Manalo home. The INC-posted guards should also be barred from questioning and taking photos of visitors and food-delivery personnel and must be positioned farther away from the gates, she added.

“The (Sept. 29) arrangement was supposed to make things easier; instead they [the INC] upped the pressure,” Angeles told reporters after Monday’s hearing. “The petitioners have been using the hearings as an excuse to continue and step up the harassment.”

“According to their petition, the INC hierarchy consented to let (the ousted Manalo siblings) stay…by virtue of the fact that they are the grandchildren of the founder (Felix Manalo) and the children of the former executive minister (Eraño),” Angeles said. “But what they are doing is isolating (Angel and Lottie) because they know (the siblings) cannot leave their birthright. This is the land that their grandfather and father bought.”

“If the INC thinks they have a better right to the possession of the property, the simple matter would have been to file an ejectment case,” she said. “But no, they want to do it this way…clearly for a far more sinister motive.”

“This is harassment. This amounts to de facto detention and my clients have done nothing to merit this kind of abuse.’’

When Angeles raised these points at Monday’s hearing, the INC counsel Serafin Cuevas Jr. countered: “To my knowledge, nobody has been harassed or precluded from entering [the compound.” He pointed out that the Manalo siblings “aren’t being prevented from going out.”

Cuevas argued that the INC was just exercising its “property rights.”

In an interview after the hearing, Cuevas said it was only “reasonable to know the occupants [of the compound] not just for the safety of the church but also for their [the Manalos’] safety as well.”

“We don’t know who’s coming in or out. We can’t identify them,” Cuevas said, adding that the expelled Manalo siblings’ camp had not yet submitted a list of the compound’s visitors and occupants as earlier agreed upon.

Asked if the expelled Manalo siblings were still authorized to stay at the INC-owned compound, Cuevas said “somehow they’re tolerated.”

At the hearing, Cuevas presented as witness a member of INC security, Masagana Maluntag, who said people with “faces covered” had been seen on security cameras entering and leaving the compound. Other witnesses included INC property custodian Norlie Asigua and INC surveyor engineer Bon Manalo.

Judge Edgar Dalmacio Santos set the next hearing for Friday.