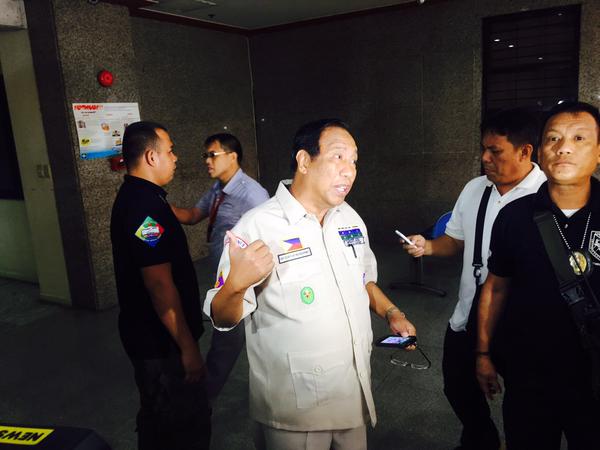 Ernesto Mercado, wearing a Boy Scouts of the Philippines (BSP) uniform arrives at the Office of the Ombudsman to file a plunder complaint against Vice President Jejomar Binay. YUJI VINCENT GONZALES/INQUIRER.net

Vice President Jejomar Binay is facing a fifth plunder complaint before the Office of the Ombudsman, this time over the allegedly anomalous land deal between the Boy Scouts of the Philippines (BSP) and Alphaland Corporation.

Saying that he pursued the filing “to protect the interest of the BSP,” Mercado told INQUIRER.net that he was confident on the strength of his complaint, which he said was backed with sufficient documentary evidence. His lawyer Renato Bondal also cited a Commission on Audit report, which he said would show that the 2008 joint venture agreement (JVA) between BSP and Alphaland was “grossly disadvantageous” to the former.

(The BSP should now be in possession of a property, a unit or cash amount to P3 billion. But until now, it hasn’t received anything.)

Noting that the BSP-NEB should have appraised the value of the property before selling it in 2011, Mercado said the BSP has yet to receive its share from the development of a one-hectare prime property on Malugay Street and Ayala Avenue Extension in Makati City, the residential and leisure complex Alphaland Makati Place.

(The property should have been reappraised in 2008 and 2011. The JVA used as basis the appraisal in 2005. But its price changed in 2001. They should have re-appraised it before selling it for P600 million. It’s upsetting that it was sold but the Boy Scout has yet to receive a single centavo.)

Bondal said they just want to give BSP what is due to them.

The allegedly anomalous deal was also a subject of previous Senate blue ribbon subcommittee hearings, where Mercado said that BSP’s 15-percent share from the joint venture was only on paper, claiming that 5 percent was used for Binay’s vice presidential campaign in 2010.

Mercado, a former ally of Binay, is a main whistleblower in the Senate hearings on the anomalies allegedly committed by the Vice President when he was still mayor of Makati.

But Alphaland CEO and businessman Roberto Ongpin cleared Binay from the allegations, saying that the five percent that Mercado was referring to was the “carried interest” that he gave to Alphaland president Mario Oreta to convince him to be part of his company.

In February, senators also pointed out during the Senate blue ribbon subcommittee hearings that BSP under Binay’s watch was “really shortchanged” over the June 2008 JVA with Alphaland. One instance of which was when BSP was paid P7.6 million by Alphaland for the rent of the third floor of the project’s podium for 2014 only in January this year after the Senate heard Mercado’s testimony.

Under the JVA, developer Alphaland would acquire rights, title and interest in 85 percent and landowner BSP, 15 percent of the gross floor area.

BSP senior vice president Wendel Avisado admitted that the organization had not collected a single cent from the project for the 2.2 million Boy Scouts nationwide.

In January, Mercado also alleged that Binay received millions of kickbacks from the BSP-Alphaland deal for the development of a one-hectare prime property on Malugay street and Ayala Avenue Extension in Makati City.

Binay’s camp and the BSP denied the allegations, saying that the Vice President was not personally involved in the transaction.

But Oreta said it was Mercado, who was also a BSP official, who asked for kickbacks from the property developer. Mercado is a former senior vice president and chairman of the corporate assets management committee of the BSP.

Mercado said the kickbacks that Binay allegedly received from the deal would be covered by a separate complaint that his camp is preparing.

Asked about the timing of his filing of the complaint a week before the filing of certificates of candidacy for the 2016 elections, Mercado said Binay should directly answer allegations against him instead of simply dismissing them as “politicking.”

Bondal added that the complaint was not meant to sabotage Binay’s presidential ambition, as it was a “consequence of legal action.”