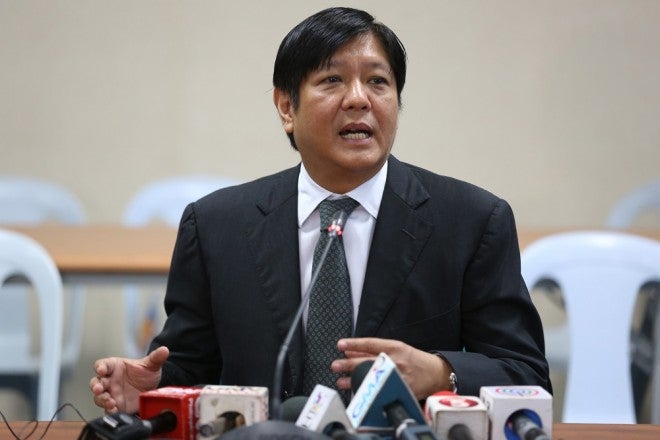 Senator Ferdinand “Bongbong” Marcos Jr. on Monday said he has decided to run for vice president in the 2016 elections.

In a statement, Marcos said he would put his political fortune in the hands of the Filipino people.

“I humbly ask them to judge whether or not I am worthy of their trust to be Vice President on the strength of my performance as a public servant in the last 26 years: first as former Vice Governor and Governor of Ilocos Norte, then as Representative of the 2nd District of Ilocos Norte and, finally, as Senator of the country,” he said.

Marcos also clarified that he is not teaming up with other presidential aspirants.

“All these [rumors] of teaming up with certain leading presidential candidates have been mere speculations,” he said.

Marcos was apparently referring to Vice President Jejomar Binay, an announced presidential aspirant, and Davao City Mayor Rodrigo Duterte, who has not decided whether he will run for president.

He said he went to Davao City last week to consult Duterte.

“He (Duterte) was gracious enough to promise me his support should I decide to run for vice president. I too will support Mayor Duterte if and when he runs for President,” Marcos said.

The senator also confirmed that he was invited to be Binay’s running mate. “There were initial talks between our supporters,” he disclosed.

However, Marcos said that any team up must be rooted on a shared vision for the country, a common platform of government, as well as political perspectives. “Unfortunately, it would be difficult for me to tame our political differences,” he added.

He reasoned that elected officials should “help change the course of history by banishing politics of personality which is to me one of the primary causes why our country today has become a soft state where the rich become richer, the poor become poorer, graft and corruption is endemic, the drug menace pervades, injustice is the norm and government incompetence is accepted as the new normal.”