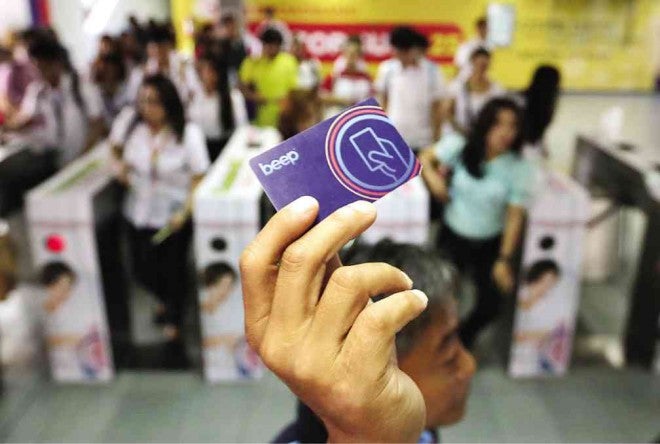 Commuters of the three elevated railways in Metro Manila can now transfer from one train to another using the unified ticket known as “beep card.”

“One of the objectives of the unified automated fare collection system when it was envisioned by the DOTC was to provide a seamless transfer from one line to another.  We are pleased to say that commuters can now enjoy this convenience.  We hope that the beep card’s interoperability feature will offer some improvement to the overall commuting experience of the Filipino,” said Peter Maher, AF Payments Inc. CEO and President.

The AF Payments Inc., an Ayala Corp. and Metro Pacific Investments Corp.-led consortium, won the contract to set up a P1.72-billion automatic fare collection system for the LRT Lines 1 and 2 and the MRT 3.

Commuters can buy the beep card for P100 with an initial load of P80.  The beep card can be loaded with as little as P11 up to a maximum of P10,000 and can be used up to four years.

The Department of Transportation and Communication (DOTC) has earlier said that the new ticketing system is expected to solve the problem of passengers from long queues at train stations, especially during rush hours.

On Monday, thousands of commuters experienced using the beep card across the three elevated railways. However, long lines were still seen on some train stations because of the bulk of train riders who have to buy their beep card.

Vina Arriesgado, who said it was her first time to buy a card, said everything went smooth since personnel assisted her in buying and using the beep card.

“It’s my first time to try the card. So far, no technical glitch. People just aren’t used to it. So there’s a bit of confusion,” Arriesgado said.

She said the attendants at the train stations were a big help. “There’s an overwhelming number of people using the trains, so I hope the information on how to use it gets taught quickly,” she said.

Karla Piangco said using the beep card was “more convenient” than using the old magnetic card because commuters could just reload the card.

“It takes you lesser time to enter and exit,” Piangco said.

But Piangco said some of the machines “broke down” and were not “operative.”

“Our technical and operations team will now focus on ensuring that feedback from the Train operators and the riding public are being consolidated, reviewed and assessed to see how the company can further improve the system.  We will continue to work hard to ensure that all the equipment, from the gates to the TVMs and the POS computers, are well maintained.” Maher said.

AF Payments Inc. said that during the pre-selling of beep card last week in MRT 3 stations, a total of 50,000 beep cards were sold. Across the three elevated railways, it said that the total sales of beep cards have reached the 500,000 mark.

AF Payments Inc. said that it is working to partner with key retailers to allow train riders to buy beep card and make loading points available outside the train stations.

The LRT lines 1 and 2 and the MRT-3 serve around 1.5 million commuters daily. JE

Read Next
Drilon: ‘Playgirls’ show had no blessing of Liberal Party
EDITORS' PICK
Kai Sotto continues to inspire Filipinos by sharing his passions and stories with Smart Prepaid
1Sambayan to nominees: Stick to word of honor
EDITORIAL: Good news, bad news
Alex Eala wins Grand Slam on Independence Day: ‘I hope I made my contribution to the country’
Trust Robredo’s political instincts – Kaya Natin! convener
Ahead of ONE: Full Blast II, Mongkolpetch warns Elias Mahmoudi: ‘Watch out for my fists’
MOST READ
China cautions G7: ‘small’ groups don’t rule the world
Duterte, Mayor Sara unlikely to run under same slate in 2022, says Lacson
1Sambayan to nominees: Stick to word of honor
PH to have cloudy, rainy Monday — Pagasa
Don't miss out on the latest news and information.