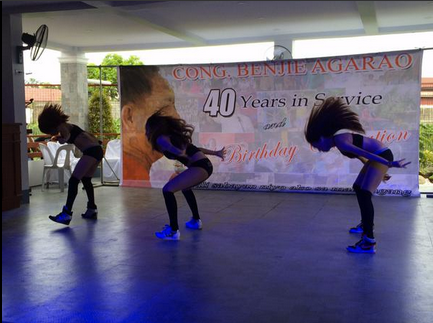 Batanes representative and Liberal Party official Henedina Abad calls for a ban on lewd shows as campaign gimmick for candidates of the 2016 elections following the staging of an obscene number during a gathering for a congressman in Laguna on Thursday.

A Liberal Party (LP) official on Friday said she would call for a ban on employing scantily clad women to woo voters’ attention during the campaign season for the 2016 elections.

In an interview at the sidelines of the budget plenary debates in the House of Representatives, Batanes Rep. Henedina Abad said it was about time LP respected women, who were vulnerable to being marginalized in a patriarchal society.

She made the reaction after her party mate, Laguna Rep. Benjamin Agarao Jr., was bashed on social media over an obscene show featuring women gyrating on top of an audience member during the celebration of his 58th birthday and 40 years in government service.

It was said that Metro Manila Development Authority (MMDA) Chair Francis Tolentino sponsored the show as a gift to Agarao, but both of them denied it.

Hurt by backlash on social media, Agarao apologized for the malicious number, backtracking from his earlier statement that he as a heterosexual man found nothing lewd with the performance.

Abad urged her party mates to be more conscious with their campaign gimmicks and not demean women just to woo voters.

“We will ban and convince them na hindi ito kagandahan. Huwag na natin gagawin at uulitin ito,” she added.

The wife of Budget Secretary Florencio “Butch” Abad said LP would investigate the incident, but stopped short of saying Agarao would be sanctioned.

Abad said she would have to wait for the party’s internal investigation before imposing sanctions on Agarao.

For his part, House Majority Leader Neptali Gonzales Jr. said it was not within LP to sanction Agarao because the supposed performance was held in a private celebration.

Gonzales said while employing women for entertainment may be considered vulgar in Metro Manila, it was a typical campaign gimmick in the provinces.

Gonzales added he would never resort to such gimmickry in his district in Mandaluyong City.

Gonzales advised his party mates to be sensitive to the sensibilities of women and refrain from using lewd performances to attract voters’ attention.