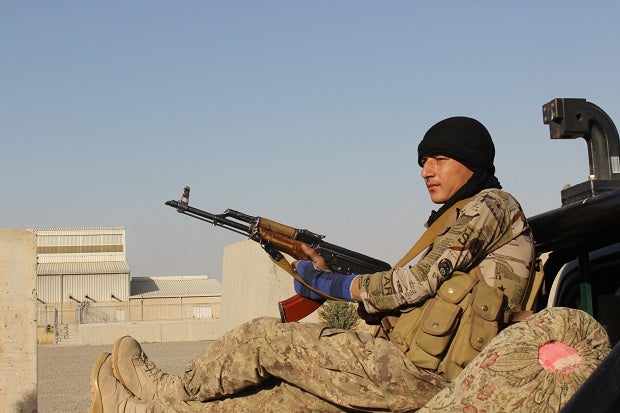 An Afghan National Army soldier rests after he arrives in a camp, outside of Kunduz city, north of Kabul, Afghanistan, Wednesday, Sept. 30, 2015. U.S. and Afghan officials pitched investors Wednesday on doing business on military airfields that NATO troops will withdraw from in Afghanistan, even as the Taliban insurgency rages on in the country. AP

KABUL, Afghanistan — Afghan troops backed by US airstrikes massed Wednesday on the outskirts of a key northern city seized by the Taliban in the buildup for what is likely to be a long and difficult campaign to drive out the insurgents.

Despite the overnight US bombing of Taliban positions, the militants extended their grip on Kunduz, forcing government forces to retreat from a strategic fortress hilltop and giving the insurgents a vantage point overlooking the city. The airport remained the only pocket of resistance to the militant onslaught, which began with a coordinated attack Monday that took the government, military and intelligence agencies by surprise.

At least three US airstrikes had targeted Taliban fighters near the city by early Wednesday. US Army spokesman, Col. Brian Tribus, said that US and NATO coalition advisers, including special forces, were also at the scene “in the Kunduz area, advising Afghan security forces.”

He denied reports that they were fighting on the ground, stressing the forces were there in a non-combat, train-and-assist role. “But these are dangerous situations and if they need to defend themselves, they will,” Tribus added.

Residents reported increasing distress as insurgents put the city under virtual lockdown, blocking roads and setting up checkpoints to prevent people from leaving. The roadblocks also kept essential supplies of food and medicine from reaching the city of some 300,000 people.

Afghan military planners, backed by US and NATO advisers, were bringing in units from across the nation’s security forces — army, air force, police, special forces and commandos. Coordination and planning was likely to take some time: The Afghan forces have been fighting alone only since the withdrawal last year of US and NATO combat troops, and the learning curve has been steep and casualties high.

The protracted crisis is a huge blow for President Ashraf Ghani, who took office a year ago pledging to restore peace to Afghanistan, and who had promised Kunduz would soon be back under government control.

But the complicated nature of the fight and the need for a cross-pillar approach under a single command means it could be some time before progress is visible, military experts said.

“Neither heavy artillery nor airstrikes on the city itself are practical as the Taliban have embedded themselves within the civilian population,” said retired Afghan army Gen. Atiqullah Amerkhail.

When the strategy is rolled out it is likely to see Afghan special forces airdropped to clear major roads and narrow alleyways, with follow-up reinforcements sent in to hold the cleared areas, he said.

Tribus, the US and NATO mission spokesman, said Afghan forces, who have faced sharp criticism and suffered from low morale as the Taliban spreads its fight across the country, have made improvements.

“Logistics are vital to operations like that in Kunduz and they have made improvements in planning operational logistics,” he said.

Retaking Kunduz will be “another test” for Afghanistan’s armed forces, Tribus said.

Taliban fighters were also gearing up for a long fight and were seen planting bombs and mining roads in and out of the city.

The situation in Kunduz has heightened concerns among US military commanders that current plans to cut the number of American troops in Afghanistan may be premature. In what would be a major policy shift, the military leadership wants to keep at least a few thousand US troops in Afghanistan beyond 2016, citing the fragile security situation.

About 9,800 US troops are in Afghanistan, and the top US commander in Afghanistan, Army Gen. John F. Campbell, has given the administration several options for gradually reducing that number over the next 15 months, US officials said. All call for keeping a higher-than-planned US troop presence, said the officials, who spoke on condition of anonymity because they weren’t authorized to speak about plans still under consideration.

The timing of a decision on new US troop levels is unclear. Campbell is scheduled to testify to Congress next week, including on the effectiveness of Afghan forces after a tough summer of fighting.

The US and NATO troops play a vital role in training and assisting the Afghan forces. US airstrikes Tuesday and Wednesday hit Taliban positions during fierce fighting for control of Kunduz’s airport, a few miles outside the city, before the Taliban retreated under fire, according to residents. The airport remained in Afghan government hands.

Another strategic site did not. A lawmaker from Kunduz, Malim Chari, told The Associated Press that the ancient fortress of Bala Hissar, which the Afghan military had used as a security post, fell early Wednesday afternoon.

Kunduz is the first major urban area seized by the Taliban since the 2001 US-led invasion ousted their extremist regime. The militants managed to sneak into the city during the recent Muslim holiday of Eid al-Adha, a busy season when many Afghans travel in and out of urban areas — despite the city being on high security alert.

The head of the country’s intelligence agency, Rahmatullah Nabil, apologized to lawmakers in parliament for the apparent intelligence failure.

Since the capture, the Taliban have been going house to house searching for government workers, instilling fear, according to residents who spoke on condition of anonymity out of fear for their safety. The militants were also said to be forcing boys and young men to fight with them.

Officials who made it to the airport before roads were sealed were still hunkered down there. The whereabouts of the provincial governor, Omar Safi, who was abroad when the city fell, were unknown. Ghani’s spokesman said on his official Twitter account that the president appointed Safi’s deputy, Hamdullah Danishi, as acting governor.

Information from inside the city remained sketchy. Kunduz residents reported acts of violence, including torching and looting of government buildings, businesses and the compounds of non-government organizations, including the UN

The UN special representative in Afghanistan, Nicholas Haysom, said he was concerned about reports “of extrajudicial executions, including of health care workers, abductions, denial of medical care and restrictions on movement out of the city.”

Reports from the region indicated that up to 6,000 civilians had fled the city to escape the fighting, a statement from Haysom’s office said.

The spokesman for Afghanistan’s Public Health Ministry, Wahidullah Mayar, said on his official Twitter account that at least 30 people had been killed in the fighting, and more than 200 injured. “Around 90 percent of them are civilians,” he tweeted.

Kunduz, 175 kilometers (108 miles) north of Kabul, has been the scene of Taliban attacks since April, when the insurgents launched their annual summer offensive with an attempt to take control of the city.

The surrounding province, also called Kunduz, is one of the country’s most important grain producers, has rich mineral resources and borders Tajikistan. Its strategic routes to neighboring countries in the east, north and west and to the capital, Kabul, mean huge sums can be earned from smuggling drugs, minerals and weapons across borders.