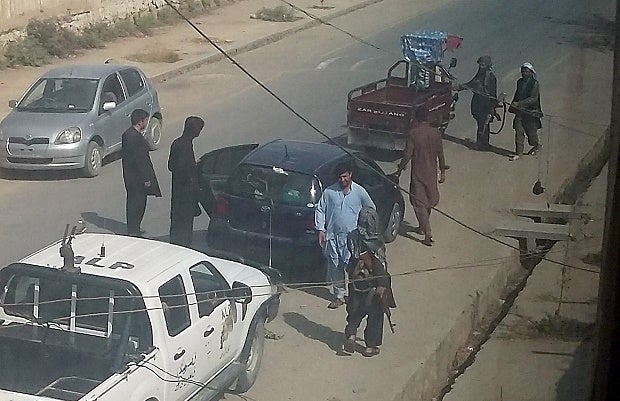 Taliban fighters search passengers and civilian vehicles in a check point in Kunduz city, north of Kabul, Afghanistan, Tuesday, Sept. 29, 2015. Taliban gunmen fanned out in full force Tuesday across a key Afghan city they captured the day before, as the US military carried out an airstrike on Kunduz and President Ashraf Ghani vowed to take the northern city back from the insurgents, urging his nation to trust Afghan troops to do the job. AP

KABUL, Afghanistan — The US military says it has conducted two more airstrikes overnight on Taliban positions around a northern Afghan city seized by the insurgents this week.

Afghan forces have been massing around Kunduz for what is likely to be a protracted battle to retake the strategic city of 300,000 inhabitants.

Residents say fierce fighting for control of Kunduz’s airport, a few kilometers (miles) outside the city, raged through the night before the Taliban retreated under fire. The residents spoke on condition of anonymity fearing for their safety.

The Taliban captured Kunduz on Monday — the first major city they have seized since the 2001 US-led invasion ousted their regime.

US military favors keeping troops in Afghanistan past 2016