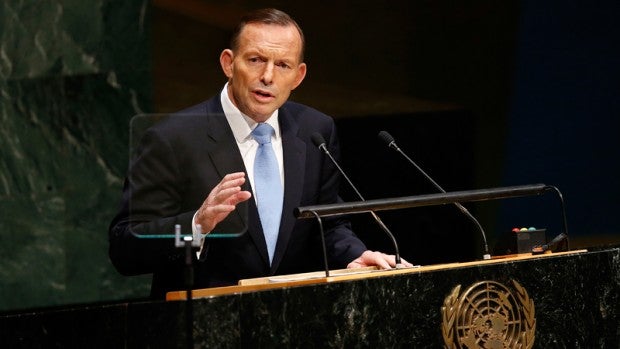 READ: Turnbull to be sworn in as prime minister of Australia

Abbott—a London-born staunch monarchist who lost his job as prime minister in a party coup two weeks ago—was heavily criticized for bringing back the knights and dames honors list in March 2014.

He faced further ridicule, including from MPs within his own conservative Liberal Party, when he decided in January to award the Duke of Edinburgh the Order of Australia.

“Interestingly though, it prompted me to put all awards in the Order of Australia into the hands of the Council of the Order and that’s probably what should have happened from the beginning.”

He would not respond to a question on whether Queen Elizabeth II had asked for the honor to be awarded to her husband.

At that time, the knighthood gaffe piled pressure on Abbott—who was already slipping in the polls—and a month later he faced the first of two party-room efforts to topple him. Malcolm Turnbull was successful in the second attempt in mid-September.

In contrast to Abbott, 60-year-old Turnbull is a vocal republican and is reportedly set to dump knights and dames from the honors list.

The multi-millionaire former barrister and banker, who entered public life when he chaired the Australian Republican Movement during a 1999 referendum on the monarchy, is expected to be supported in cabinet with a proposal to remove the royal titles.