Turnbull to be sworn in as prime minister of Australia 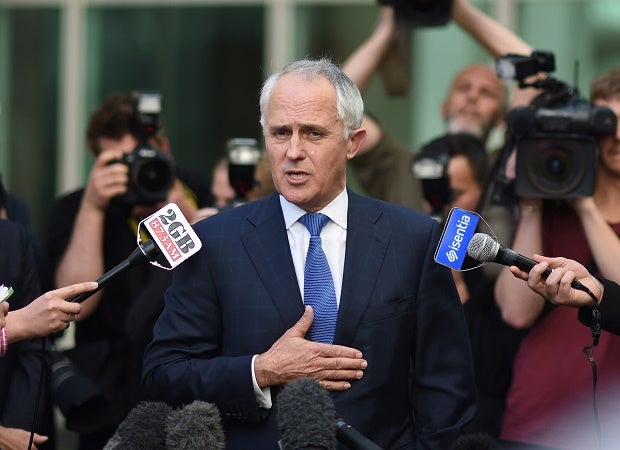 New Australian Prime Minister Malcolm Turnbull speaks to the media that he asked former Prime Minister Tony Abbott to open up the party’s leadership to an internal vote at Parliament House in Canberra, Monday, Sept. 14, 2015. AP

CANBERRA, Australia—Malcolm Turnbull was to be sworn in as Prime Minister of Australia on Tuesday just hours after masterminding a coup against conservative leader Tony Abbott and pledging a new economic vision.

Turnbull will be the country’s 29th prime minister—and the fourth in five years as Australian political parties maintain a brutal tradition of swiftly removing failing leaders.

“I’m filled with optimism and we will be setting out in the weeks ahead… more of those foundations that will ensure our prosperity in the years ahead,” Turnbull told reporters.

After the swearing in by governor-general Peter Cosgrove, the former communications minister was to attend a Liberal Party meeting and then hold his first cabinet session after pledging to run a collaborative and consultative government, in contrast to Abbott’s divisive rule.

The timing for the swearing-in ceremony was not immediately known.

He would also be in parliament during the afternoon to answer questions as new prime minister.

“This is a turn of events I did not expect, I have to tell you, but it’s one that I’m privileged to undertake, and one that I’m certainly up to,” Turnbull added.

He was widely expected to appoint Social Services Minister Scott Morrison as treasurer to sell the new economic vision.

“The Prime Minister (Abbott) has not been capable of providing the economic leadership our nation needs,” Turnbull said Monday.

He survived a leadership challenge in February after poor polling and a serious of gaffes ignited a backbench revolt.

But Abbott has since failed to turn around the polls, bolster the economy or stop damaging internal leaks and lost the support of the majority of his party.

After his 54-44 victory late Monday, Turnbull, a multi-millionaire former lawyer and banker, ruled out an early national election to cement his leadership.

Elections do not need to be held before January 2017.

Turnbull also said there would be no change to Australia’s climate policy.

But, with strong support from Foreign Minister Julie Bishop, who the party re-elected deputy leader with a strong 70-30 vote in her favor, he was expected to shake up the cabinet.

Turnbull is thought likely to sweep out traditional conservatives and bring in younger blood and more women.

But Turnbull said he will not announce a reshuffle of his ministers before Friday.

The Australian front-paged “Turnbull’s triumph” while The Sydney Morning Herald ran with “The Coup.”

The Financial Review said the Liberal Party was ripping itself apart “amid scenes of carnage.”