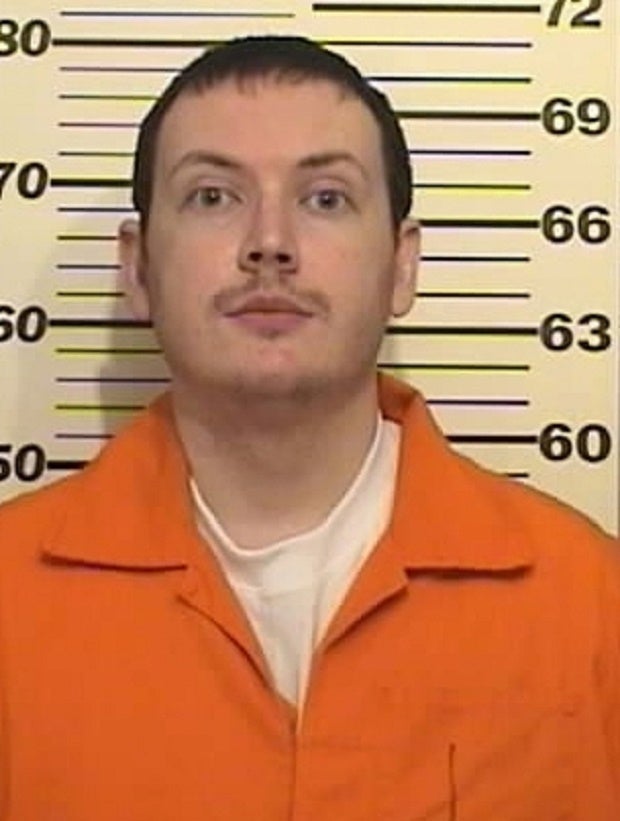 This 2015 photograph provided by the Colorado Department of Corrections shows convicted Aurora, Colo., theatre shooter James Holmes. Holmes has been moved to a southern Colorado prison where he is being held in a cell by himself. Department of Corrections spokeswoman Adrienne Jacobson says Holmes is not in maximum security but has fewer privileges and is monitored more closely than other inmates. He will stay at the Colorado State Penitentiary until officials find a suitable facility for him. AP

CENTENNIAL, Colorado — Colorado theater shooter James Holmes is being held alone in a cell in a southern Colorado prison, where he is more closely monitored and has fewer privileges than other inmates, officials confirmed Monday.

Holmes is not in maximum security at the Colorado State Penitentiary but is more heavily supervised, which is not uncommon for those convicted of murder or for new prisoners, Department of Corrections spokeswoman Adrienne Jacobson said. She confirmed that Holmes was moved from a processing facility to the prison, though the transfer happened quietly last week.

Holmes will stay at the prison in Canon City until officials find more suitable housing for him in a unit that provides even stricter supervision for the safety of staff and other inmates. Jacobson would not give further details about how he is being housed.

A judge in August sentenced Holmes, 27, to life in prison without parole after jurors failed to agree he deserved the death penalty. He was convicted of murdering 12 people and trying to kill 70 more in the July 20, 2012, massacre at a crowded movie theater in suburban Denver.

Citing safety concerns, officials did not post Holmes’ photo and location on the corrections department’s website, where other inmates’ information is publicly available.

Holmes’ life sentence means he can try to earn his way into less restrictive housing, unlike inmates on death row, Jacobson said.

But documents released separately Monday that detail Holmes’ three years in a county jail show some of the difficulties ahead for him and authorities trying to house him. The jail logs and other documents released by the Arapahoe County Sheriff’s Office in response to an open-records request by The Associated Press illustrate the problems caused by his notoriety.

Less than a month after Holmes’ arrest, sheriff’s deputies caught him using a spoon to pry the screws out of a handicapped railing inside a cell. He told a deputy he needed “metal” to use a “club” to protect himself because “other people that come out of their cells hate him and he is afraid they may hurt him,” according to a report.

The deputy assured Holmes he was safe, but the incident led deputies to search Holmes’ cell and mattress and remove the metal railing.

Deputies were on alert again in September 2012, when a man called the jail asking to talk to “his friend” Holmes or he would “kill more people like Holmes did and would show no remorse,” records say. The man told deputies he had explosives and planned to “blow up the jail to free Holmes.”

Sheriff’s deputies identified the caller and sent it for investigation, but the reports don’t say what happened.

In April 2013, a fellow inmate told his girlfriend during a recorded visit that he “didn’t want to kill him (Holmes), he just wanted to hurt him,” and if he ever saw Holmes walking to court, he would try, documents say. The reports don’t show what action sheriff’s deputies took.

Another inmate passed Holmes a note asking for his autograph.

Deputies also faced groups of young female “sympathizers” who traveled to Colorado to attend Holmes’ court hearings. A police officer at the movie theater where the attack took place notified deputies after three women who said they were Holmes’ cousins said they wanted to go see him at the jail, according to the documents.

People from around the world sent Holmes letters of support. But a log says he received just 10 visitors during his three-year stay, mostly mental health experts who examined him for trial. One doctor, Bhushan Agharkar, saw Holmes twice but was never called to testify.

His mother saw him three times.