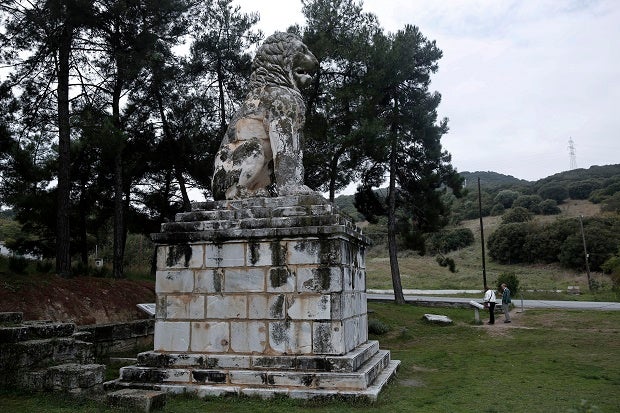 In this Wednesday, Oct. 8, 2014 file photo, tourists read a sign in front of the reconstructed, colossal 4th century BC marble Lion of Amphipolis, some 5 kilometers from a large funeral mound currently under excavation by Greek archaeologists near Amfipolis, Greece. An opulent underground monument in northern Greece that caused a stir when excavated last year may have been a symbolic grave – but not the final resting place of -_ the closest friend and general of ancient warrior-king Alexander the Great, the excavator Katerina Peristeri said on Wednesday, Sept. 30, 2015. AP Photo

THESSALONIKI, Greece—An opulent underground monument in northern Greece that caused a stir when excavated last year may have been a symbolic grave—but not the final resting place of—the closest friend and general of ancient warrior-king Alexander the Great, the excavator claimed Wednesday.

Archaeologist Katerina Peristeri said she believes the vaulted structure, decorated with sculptures and a mosaic floor, “was a funerary monument for Hephaestion.”

The Macedonian nobleman grew up with Alexander and died in Persia in 324 B.C., predeceasing the king by less than a year and driving him into a frenzy of grief during which he ordered a series of monuments to be built for Hephaestion across his newly-won empire.

But Peristeri said there was no evidence Hephaestion was actually buried at the tomb in Amhipolis, east of Thessaloniki, whose excavation grabbed headlines, provoking speculation that it might belong to Alexander himself, who lived from 356-323 B.C.

Another archaeologist however, who was not involved in the excavation, rejected her identification as “totally unfounded.”

Panayiotis Faklaris, associate professor at the University of Thessaloniki, told the Associated Press the tomb more likely belonged to some prominent ancient citizen of Amphipolis.

“There is no historic or scientific basis” for what Peristeri claimed, he said. “Hephaestion had no connection with Amphipolis.”

The discovery caused controversy from the outset. Other experts criticized Peristeri for digging too fast and creating unjustified expectations that the tomb was unplundered.

The monument contained twin marble statues of sphinxes and young women, had a painted frieze—parts of which survive—and, according to Peristeri, was topped with a large marble lion now standing a few kilometers away.

Peristeri has offered no explanation of one of the find’s strangest features—that it sheltered at least five skeletons, including an elderly woman and a baby.

She argued Wednesday that fragmentary inscriptions link the monument with Hephaestion, and said an Alexander-era coin found in the monument—which she thinks was filled with earth generations later to protect it from vandals—confirms it was built in 325-300 B.C.

Alexander led an army of Greeks to conquer a vast empire stretching as far as modern Pakistan. Ancient writers say he considered Hephaestion to be his alter ego, making him the second most powerful man in the empire.

When Hephaestion died, Alexander is recorded to have granted him hero’s rites, declared mourning throughout the empire and had him cremated in Babylon at enormous expense.