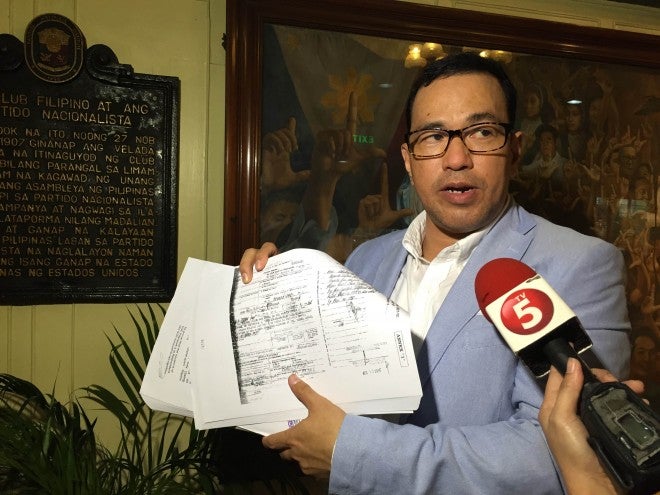 Atty. Manuelito Luna, the counsel of Rizalito David, shows to the media on Wednesday, Sept. 30 the discrepancies in the birth certificates of Senator Grace Poe which will support their claim that she is not a natural-born Filipino and thus ineligible for a Senate seat. Photo by: Aries Joseph Hegina/INQUIRER.net

THE camp of Rizalito David, a defeated senatorial candidate in the 2013 polls who is seeking to unseat Senator Grace Poe, bared on Wednesday some discrepancies in her birth certificates which will supposedly bolster their claim that she is not a natural born Filipino.

Showing the documents as part of the pieces of evidence they presented before the Senate Electoral Tribunal (SET), David’s counsel Atty. Manuelito Luna said that Poe’s birth certificate issued on November 27, 1968 showed specifically that she is a foundling.

But in Poe’s other birth certificate, which was issued on May 4, 2006, it showed that she is a Filipino and the first-born in the family.

Other “glaring” errors spotted by Luna on Poe’s 2006 birth certificate include:

He said that if the Poes are acting in good faith, they should have put “NA” on her citizenship and “adopted” on the “birth order” in the items on her birth certificate.

The lawyer claims that Poe secured the 2006 birth certificate in preparation of her reacquisition of her Philippine citizenship under the Dual Citizen Act, which she subsequently filed in July 2006. Since Poe is a foundling, she should not have been given the opportunity to reacquire her Filipino citizenship, Luna explained.

David’s camp also alleged that her adoption papers are invalid as these were granted by the municipal court in San Juan, Rizal.

Luna said that adoption proceedings, as provided by law, could only be heard and granted in a regional trial court.

David’s camp: We sympathize for Poe but…

Luna said that while they recognize the status of Poe as a foundling, she still violated the Constitution by violating the requirements to run for a Senate seat as she is allegedly not a natural born Filipino.

“Since she violated the requirements, unless she will be able to disprove our claim that she is not a natural born Filipino, then she is disqualified and ousted from the Senate,” he added.

The said birth certificates, adoption paper, as well as travel documents and passport records of Poe and her children form part of the 140-page Offer of Evidence they filed before the Senate Electoral Tribunal (SET).

The SET required both camps to submit their memorandum on the case on or before October 6, or 15 days after the September 21 oral arguments.

Luna said that they will file their memorandum as early as October 1 or as late as October 5.