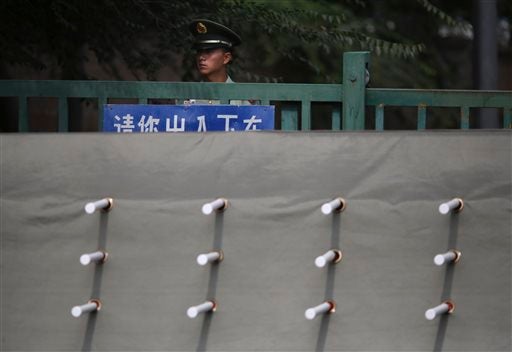 A Chinese paramilitary policeman stands watch behind a barrier leading to a side road outside the Japanese Embassy in Beijing, China, Wednesday, Sept. 30, 2015. China is holding two Japanese men on suspicion of spying, Japanese media reported Wednesday. AP

Chief Cabinet Spokesman Yoshihide Suga told reporters that the two Japanese were both picked up in May, one in Zhejiang province and the other in Liaoning.

He refused to give details, including the specific allegations the two face.

Japanese newspapers and television stations reported earlier that the two were both men. One of the men was apprehended near military facilities in coastal Zhejiang and the second one near the border with North Korea at about the same time, according to the reports, which cited unnamed sources familiar with Japan-China affairs.

In 2010, four employees of a Japanese construction company were accused of filming a Chinese military site in Hebei province but were released within a few weeks. TVJ