Ombudsman to probe Abad over DAP 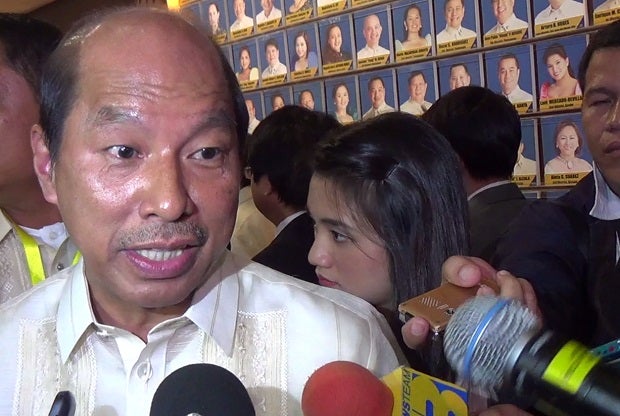 In a statement on Wednesday, Morales approved the preliminary investigation and administrative adjudication of Abad, who was said to be the brains behind DAP, a savings-impounding mechanism, portions of which had been declared unconstitutional by the Supreme Court.

Also ordered investigated was Budget Undersecretary Mario Relampagos, who faced multiple charges of graft for allegedly speeding up the releases of pork barrel to lawmakers accused of plunder.

Noticeably, the Ombudsman did not order an investigation on Aquino who appointed Morales, a retired Supreme Court Justice, as Ombudsman in 2012.

The investigators said there were irregularities involving DAP funds in cross border transfers to the Commission on Audit (COA) and the House of Representatives for the years 2011 and 2012.

Morales said of the P31.9 billion DAP funds, P250 million was released to the House of Representatives for the construction of its new legislative library and archives. Field investigators said the library was not approved by Aquino.

Meanwhile, P143.7 million was released to the COA for its IT infrastructure program and hiring of additional litigation experts.

The Ombudsman said it was Abad who prepared and signed memoranda and issuances on the DAP implementation while Relampagos signed the special allotment release orders to COA and the House of Representatives.

A special panel of investigators was formed to conduct the preliminary investigation.

The Ombudsman also recommended to COA to conduct a special audit on the utilization of DAP funds by the executive department.

Under Article 220 of the Revised Penal Code, the crime of technical malversation is committed by a public officer who disburses public funds or property for a purpose different from which they were originally appropriated by law or ordinance.

In a statement issued by Abad’s office, the Department of Budget and Management (DBM) welcomed the investigation and left it to the “fair and sound judgment of Ombudsman Morales.”

The DBM clarified that the alleged offense—technical malversation—did not mean money was pocketed from the DAP projects.

Technical malversation only implied that the funds were spent for projects which were not part of the original plan, the DBM said.

“At the same time, we wish to clarify certain terms relevant to the investigation, particularly those that may invite specific public attention. First, technical malversation does not suggest that the individuals in question committed acts of graft or corruption. Nor does the investigation imply that these individuals used public funds for their personal gain or benefit. Certainly, the inquiry is not a matter of whether individuals had stolen from public coffers,” DBM said.

“The inquiry involves the application of excess or unutilized public funds to existing priority government projects and programs that require additional funding. The investigation seeks to determine whether these uses of public funds constitute technical malversation, where public funds are used for a public purpose that differed—in a very technical sense—from the original plan,” it added.

The agency clarified that the Supreme Court did not declare the DAP unconstitutional per se, and that the doctrine of operative fact should be for the implementors of the program to be presumed to have acted in good faith.

The DBM also said the Supreme Court also noted the positive impact of the DAP, originally an economic stimulus package, on the country’s economy.

“The DBM will of course cooperate with the Office of the Ombudsman in the course of their investigation. We look forward as well to the inquiry’s swift and fair conclusion,” DBM said.

DAP first became controversial when Sen. Jose “Jinggoy” Estrada, who is detained for plunder over the pork barrel scam, bared in a September 2013 privilege speech that senator judges were bribed P50 million in DAP to convict then Chief Justice Renato Corona on false declarations of wealth.

Some practices under DAP were declared unconstitutional by the Supreme Court in July 2014 ruling which it later modified in February 2015.

Those declared unconstitutional were the following:

Withdrawing unobligated allotments of agencies with low levels of obligations as of June 20, 2012, both for continuing and current allotments;

Cross-border transfers of the savings of the executive to augment the appropriations of other offices outside the executive;

Funding of projects, activities and programs that were not covered by any appropriation in the GAA; and,

The use of unprogrammed funds despite the absence of a certification by the national treasurer that the revenue collections exceeded the revenue targets for noncompliance with the conditions provided in the relevant GAA.

They are accused of pillaging their PDAF to ghost projects for kickbacks under the alleged scheme of Janet Lim-Napoles. Revilla and Estrada are detained at the Philippine National Police Custodial Center, while Enrile is out on bail. Lanete and Valdez are detained at Camp Bagong Diwa in Taguig City.

In an interview at the sidelines of the budget plenary debates in the House of Representatives, Speaker Feliciano Belmonte Jr. took the cudgels for his ally Abad and said the DAP controversy was different from the corruption scandal involving the PDAF.

Belmonte said unlike in PDAF, which allegedly lined the pockets of lawmakers, the DAP funds were spent judiciously for infrastructure such as buildings and bridges.

He said Abad only had the best intentions in mind when he aligned the DAP funds lying idle as savings to other agencies instead of letting these go stale in the treasury.

“There’s a big difference between the basic logic of PDAF cases and the DAP cases. The DAP cases simply is that money in their judgement had better uses public uses either because they had become savings already or could not be done anymore for one reason or another. Basta may reason behind which the money becomes available. Instead of letting money lie idle in the treasury, they reappropriated it for some other public purpose,” Belmonte said.

“The DAP, from the point of view of Budget Secretary Abad, was simply trying to use money appropriated for a certain purpose, which in his mind or in his judgement was no longer as important as before or had been accomplished, or to the point that these are now savings and realigning them to other public use which do not end up in anybody’s pockets. They have resulted in streets, in buildings and so forth,” he added. Marc Jayson Cayabyab/IDL/RC