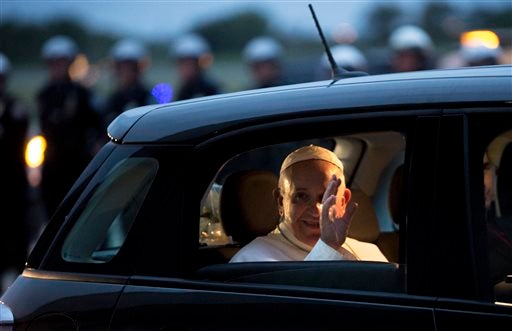 Pope Francis waves from his Fiat as he prepares to depart for Rome at Philadelphia International Airport in Philadelphia on Sunday, Sept. 27, 2015. AP PHOTO/LAURENCE KESTERSON

PHILADELPHIA—Pope Francis left the United States late Sunday after a landmark six-day trip during which he addressed thorny issues such as immigration, climate change and the scandal over the clergy’s sexual abuse of children.

The pontiff during his visit met with US President Barack Obama and addressed Congress in Washington, spoke at the United Nations in New York and led a huge family conference, wrapping up with an open- air Mass in Philadelphia.