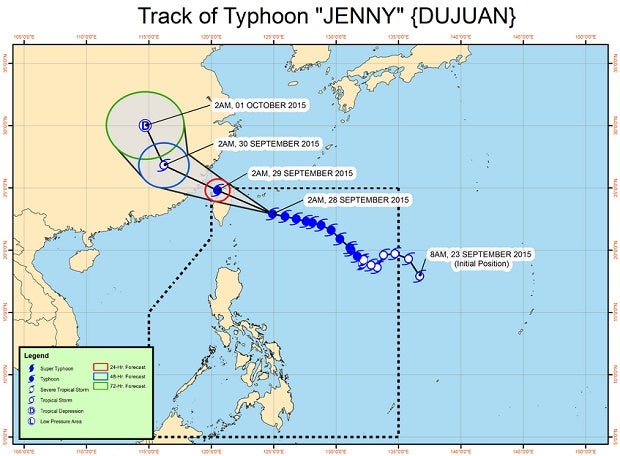 Typhoon Jenny (Dujuan) slightly accelerated on Monday morning as it continued to move in a west northwest direction, the state weather bureau said.

The typhoon packed maximum sustained winds of 185 kilometers per hour near the center and gusts of up to 220 kph, the Philippine Atmospheric, Geophysical and Astronomical Services Administration (Pagasa) said.

Signal No. 1 continued to be hoisted over Batanes Group of Islands, where rains and gusty winds are expected.

Light to moderate rain is expected over the regions of Ilocos, the Cordilleras, Cagayan Valley, Central Luzon, Metro Manila, Mimaropa, Calabarzon and the island of Panay “due to Typhoon Jenny and the Southwest Monsoon,” Pagasa said.

Partly cloudy to cloudy skies with isolated thunderstorms will prevail over the rest of the country, Pagasa said.

Jenny was last tracked 390 kilometers northeast of Itbayat, Batanes, and was moving at west northwest at 19 kph.