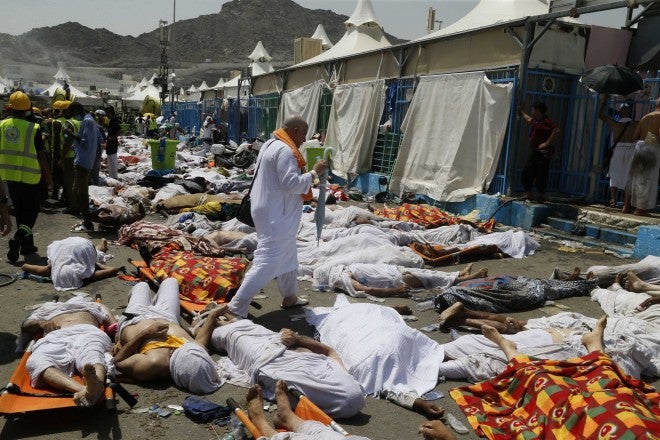 A muslim pilgrim walks through the site where dead bodies are gathered in Mina, Saudi Arabia during the annual hajj pilgrimage on Thursday, Sept. 24, 2015. AP

MECCA — Saudi Arabia deployed large numbers of security reinforcements Saturday as pilgrims performed the final rituals of a hajj marred by double tragedy, with the death toll from a stampede rising to 769.

The kingdom’s leaders have ordered an inquiry into the disaster — the deadliest to strike the annual Muslim pilgrimage in a quarter-century — and a “revision” of its organization, with the deaths raising tensions with regional rival Iran as well.

Dozens of emergency workers were seen on one level of Jamarat Bridge, a five-story structure in Mina where pilgrims ritually stone the devil, and on which hundreds of thousands were converging when Thursday’s stampede occurred nearby.

Many more patrolled the network of roads leading to the structure, which resembles a parking garage.

The interior ministry has said it assigned 100,000 police to secure the hajj and manage crowds.

But pilgrims blamed the stampede on police road closures and poor management of the throng, during searing temperatures.

“People were trying to maneuver to the front for safety but police were saying ‘Go back! Go back!'” said Nigerian Abbas Tijani, who escaped with injuries.

“Everybody was trying to survive,” he said from his hospital bed. “People were stepped on by people.”

In all, 769 people were killed and 934 others were wounded, according to Health Minister Khaled al-Falih.

Criticism has been particularly strident from Saudi Arabia’s regional rival Iran, 136 of whose nationals were among the dead.

“It is not only incompetence, but a crime,” Iranian Attorney General Ebrahim Raeisi said,  while President Hassan Rouhani used an address to the United Nations on Saturday to call for an investigation.

Culture Minister Ali Janati is to head a delegation to Saudi Arabia to follow up on 344 Iranians Tehran says are missing, but state news agency IRNA said his team still has not received visas.

“I would hope Iranian leaders would be more sensible and more thoughtful with regards to those who perished in this tragedy, and wait until we see the results of the investigation,” said Foreign Minister Adel al-Jubeir.

The disaster was the second deadly accident to mar the hajj. A massive construction crane collapsed on the Grand Mosque in the nearby holy city of Mecca days beforehand, killing 109 people, many of them pilgrims.

Undeterred Saturday, pilgrims in Mina still flooded the area to perform the ritual stoning for a third time, on the last day of the hajj which this year drew about two million people.

They also stood in prayer.

Most began leaving on Saturday, returning to Mecca where many performed the tawaf — where they circumambulate the Kaaba in the middle of the sacred site at the Grand Mosque — watched on by heavy security.

Abdullah al-Sheikh, chairman of the Shura Council, which advises the government, stressed that pilgrims must stick to “the rules and regulations taken by the security personnel”.

That echoed comments Friday by Health Minister Falih, who faulted the worshippers for the tragedy, saying that if “the pilgrims had followed instructions, this type of accident could have been avoided”.

“You are not responsible for what happened,” official news agency SPA quoted Sheikh as telling him.

“Fate and destiny are inevitable.”

Authorities have yet to provide a breakdown of the nationalities of pilgrims killed in the stampede, as the difficult process of identification continues.

Around 250 deaths in total have been officially confirmed by foreign officials, largely from African and Asian countries.

For years, the hajj was marred by stampedes and fires, but it had been largely incident-free for nine years after safety improvements and billions of dollars worth of infrastructure investment.

The hajj is one of the five pillars of Islam, and every able-bodied Muslim who can afford it is expected to perform it at least once in a lifetime.