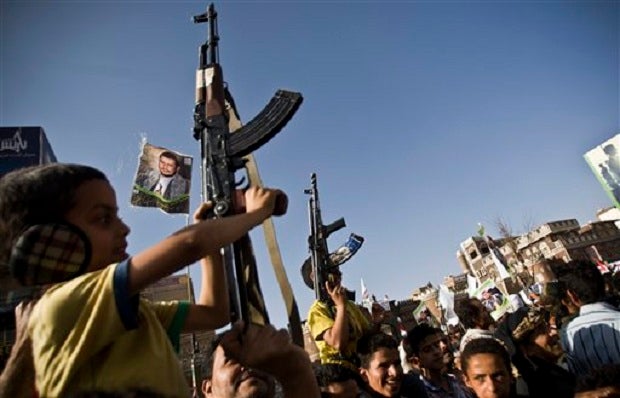 Boys hold weapons in this file photo as Shiite rebels known as Houthis gather to protest against Saudi-led airstrikes, during a rally in Sanaa, Yemen, April 1, 2015. AP

RIYADH, Saudi Arabia — A Saudi general has been killed in the south of the country near the border with Yemen, where he had been “defending the country”, the army announced Sunday.

Brigadier General Ibrahim Hamzi, deputy commander of the 8th brigade in Jazan, died from his injuries after being taken to hospital, Saudi Arabia’s official news agency said, without giving the date or exact circumstances of the incident.

He is the second high-ranking Saudi military official to have been announced killed on the Yemen border this weekend.

A colonel and another border guard were killed late Friday in a gun battle after a landmine blast along the frontier with Yemen, according to the interior ministry.

Several other Saudi soldiers have also been killed since March when the kingdom formed an Arab coalition to fight Shiite Houthi rebels in Yemen.

In June, a Saudi lieutenant colonel died in a landmine blast in Jazan, while another general was killed in cross-border fire in August.

Riyadh launched air strikes against the Houthis to support the internationally-backed government of Yemeni President Abedrabbo Mansour Hadi, which was losing ground.

Saudi Arabia feared the Houthis would take over all of Yemen and move its neighbor into the orbit of the Sunni kingdom’s Shiite regional rival Iran.

But the rebels have lost territory since late July when the coalition began deploying ground troops in support of local forces.

Around 70 people have been killed in Saudi Arabia from border shelling and skirmishes since the coalition campaign began. Soldiers have accounted for most of the border casualties.

The United Nations says nearly 4,900 people, including a vast number of civilians, have been killed in Yemen since late March.