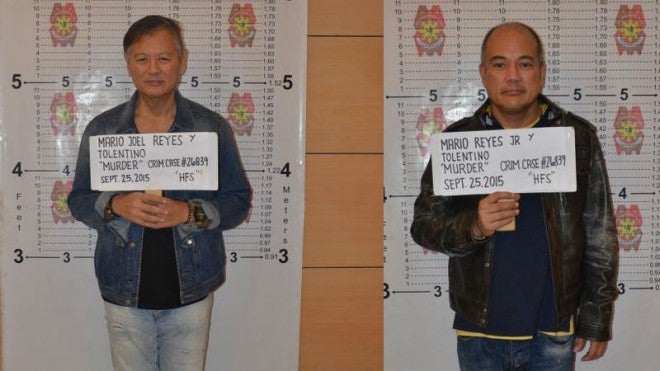 Under tight security and barred from speaking with the media, the brothers were whisked outside the airport by their CIDG escorts immediately upon arrival at 2:30 p.m.

A beaming Reyes tried on several occasions to speak to media upon arrival but he was repeatedly led away. He was heard blurting out at one time, “marami akong gustong sabihin sa media.”

Jail officer Marcelito Anza told reporters that the brothers would be held in one cell measuring 5x3x8 meters with two windows and separate from the rest of the detainees.

He added, however, that detaining the brothers in separate cells was “a necessary security measure.”

The Reyes brothers arrived in the Philippines before dawn on Friday after they were arrested in Phuket, Thailand, on Sept. 19. They were flown to Puerto Princesa at 1:30 p.m. on Friday to return their warrants of arrest to the regional court.

The two were implicated in the murder of environmentalist and broadcaster Gerardo Ortega in 2011 but managed to escape from the country and went into hiding after a warrant for their arrest was released in March 2012. With reports by Radyo Inquirer, INQUIRER.net

From Crame, Reyes brothers to be flown to Palawan