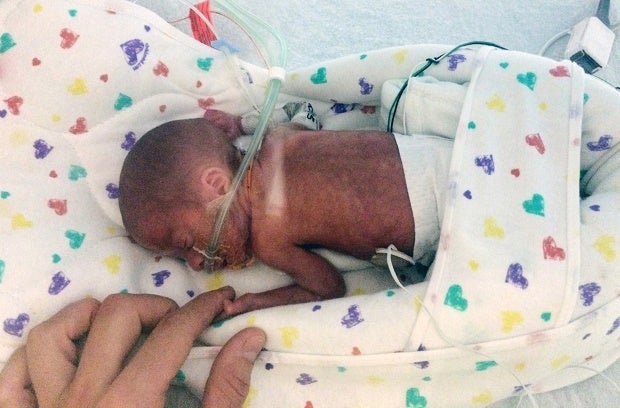 In this Sept. 11, 2015 photo provided by Emily Morgan, Chase Morgan holds his son Haiden’s hand at the Miami Children’s Hospital. Emily Morgan, who unexpectedly gave birth on a cruise ship months before her due date says she wrapped towels around her boy and, with the help of medical staff, managed to keep him alive until the ship reached port. He’s now receiving care at a neonatal intensive care unit in Miami. AP

SALT LAKE CITY, Utah — A Utah woman who unexpectedly gave birth on a cruise ship months before her due date says she wrapped towels around the 1 1/2-pound boy and, with the help of medical staff, managed to keep him alive until the ship reached port.

Emily Morgan, of Ogden, said Thursday that doctors didn’t expect her son Haiden to live, but thanks to strong lungs, a makeshift incubator and an early arrival in Puerto Rico, the baby made it. He’s now receiving care at a neonatal intensive care unit in Miami.

Morgan, 28, said the baby was due in December, but contractions began Aug. 31 during a seven-day cruise around the eastern Caribbean. Her doctor approved the cruise to celebrate her daughter’s third birthday, Morgan said.

The pregnancy had been uneventful, so she was shocked when the contractions began just past the halfway mark in her pregnancy. She thought they might be false labor.

But she and her husband called medical staff when they saw blood. A doctor aboard the Royal Caribbean ship told her she couldn’t give birth because they were still 14 hours from the nearest port in Puerto Rico. But holding back wasn’t an option, Morgan said.

“I knew the baby was coming,” she said.

After the delivery, she said the doctors told her she had miscarried and she should get some rest, but she insisted on seeing the baby. About 45 minutes later, medical staff said the baby had survived but wasn’t expected to live long.

They brought her to her newborn son, who was wrapped in towels wet from the birth. He was wearing a tiny oxygen mask on his face.

“He was crying, like a little feeble cry,” she said. Along with his healthy pink coloring, it was a positive sign that his lungs were relatively strong.

As the hours went on, she insisted he be wrapped in fresh, dry towels, and she helped staff tuck microwaved saline packets around him to create a makeshift incubator. They used a sanitary napkin to keep his head warm and tried to avoid touching his sensitive skin.

Meanwhile, the captain was speeding the boat to Puerto Rico, and it arrived about two hours early. It was none too soon — black spots were starting to appear on Haiden’s fingers, indicating his circulation was starting to fade.

Two ambulances rushed the family to a hospital, and they were transferred to a children’s hospital in Miami a few days later.

Morgan said she was frustrated when officials initially didn’t let her see the baby, but she believes they were just trying to protect her. She added that they have been very responsive in helping her family navigate a difficult situation.

Royal Caribbean officials did not return a message from The Associated Press seeking comment.

Haiden is making good progress, Morgan said. He’s being fed breast milk through a syringe into a tube in his stomach — 2 tablespoons at a time over the course of 90 minutes.

He’s expected to be hospitalized until his Dec. 19 due date. The family hopes Haiden will be strong enough to be transported to a Utah hospital at the end of October and rejoin his 3-year-old sister Chloe, who’s being cared for by her grandparents. The mounting medical bills are an issue for the family, and they are accepting online donations to help pay for the cost of the baby’s premature arrival.

It’s not totally clear what caused Morgan to go into early labor, though doctors have said it might have been related to dehydration, an elevation change or the differing temperatures at sea, she said.

KSL-TV in Salt Lake City was first to report on the birth.

A baby like Haiden born so early and so far from a hospital has a less-than-10 percent chance of survival, said Dr. Bradley Yoder, medical director of the newborn intensive care unit at the University of Utah.

Babies born months premature are typically whisked into intensive care immediately and given medication to help them breathe.

“I’m surprised the baby survived, to be honest,” Yoder said.